Sharon Osbourne has had many roles in her life – including that of mother. The wife of Ozzy Osbourne is the proud mom of three amazing kids, so learn more about Kelly, Jack, and Aimee Osbourne.

Though Sharon Osbourne was a fixture in the metal world long before The Osbournes premiered in 2002, it was the MTV reality show that introduced Sharon and her family – husband Ozzy Osbourne and their children, Jack and Kelly – to a mainstream audience. In the following two decades since The Osbournes, the clan has all gone on different journeys. Kelly had a short-lived music career, launched a clothing line, and is currently hosting a podcast. Jack has started a family, developed a career as a travel reporter, and has starred in some non-scripted shows. And Ozzy…has remained Ozzy.

What The Osbournes didn’t show was that there is a third Osbourne child: Aimee Osbourne, the eldest of Sharon and Ozzy’s three children. Amiee famously shunned the reality television spotlight. “I know my eldest girl, Aimee, left home at 16, and she couldn’t live in our house because we were filming, and it drove her insane,” Sharon said during a 2018 episode of The Talk. “She felt too that she didn’t want to grow up on camera. She hated the idea — it was appalling to her. And so she left at 16, and I regret every day that she did.”

Here’s what you need to know about Sharon Osbourne’s kids. 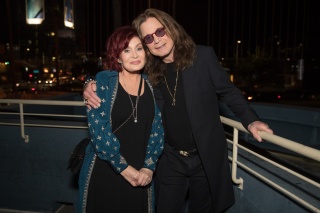 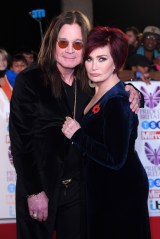 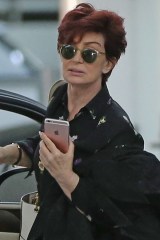 Aimee Rachel Osbourne was born on Sept. 2, 1983, in London, England. As the eldest child of Ozzy and Sharon Osbourne, Aimee grew up during her father’s initial success as a solo star after Black Sabbath fired him in 1979. “I always had a pretty strong, clear sense of who I was,” she said in a 2020 interview with SiriusXM Volume/Yahoo Music. “My parents always said I was a real old soul, even as a baby. They say that I would look at them very disconcertingly, kind of like, ‘Um, you two need to get it together.’ Like, I had these very serious expressions on my face.”

Growing up the daughter of a world-famous rocker (who had a world-famous drug problem) affected Aimee’s perspective on the world. “To me, I’d grown up around having a pretty well-known dad anyway, and I always really valued my privacy within that family,” she told New York radio station Q104.3 in 2020. So, when The Osbournes began, Aimee bailed. She wanted to “give myself a chance to actually develop into a human being as opposed to just being remembered for being a teenager…It definitely worked great for the rest of my family, but for me, and who I am, I just knew it was never something that I would have been able to consider realistically.”

Aimee has followed in he father’s footsteps. While she has done some acting – she was cast in MTV’s 2003 adaptation of Wuthering Heights – she is best known as a singer, fronting the music project, ARO. With a sound more influenced by Kate Bush and Portishead than Iron Maiden and Motorhead, ARO released its first studio album, Vacare Adamaré, in 2020.

Aimee said she was a “loner” throughout her teenage years, adding that she would “sit in my room for hours with my disco ball light, listening to all my favorite bands and just kind of, you know, creating this kind of inner world in my head to all these incredible songs and artists.” Despite that, she said she’s close to her parents. “I actually have been staying with them throughout [the COVID pandemic],” she said in 2020. “It’s quality time.”

Kelly Michelle Lee Osbourne was born on Oct. 27, 1984. Kelly first gained fame via The Osbournes, which premiered in March 2002 and ran until March 2005. Kelly’s personality was as big as her parents’, and she quickly became one of the biggest stars on the show. In November 2002, Kelly released her debut album, Shut Up. It contained a cover of Madonna’s “Papa Don’t Preach,” which reached No. 74 on the US Billboard Hot 100, and No. 3 on the UK Single Charts. She and Ozzy covered Black Sabbath’s “Changes,” and the duet hit No. 1 in the UK. In 2005, Kelly released Sleeping in the Nothing, her second album, which saw her learn more towards 80’s inspired electro-pop.

Kelly, who struggled with substance abuse since she was a teen, entered herself into rehab in summer 2005, which prevented her from promoting the album. Thus was the end of Kelly’s music career.

Kelly put her music career behind her and shifted focus to fashion and hosting. She appeared on programs like Project Catwalk on Sky1, I’m a Celebrity…Get Me Out of Here! NOW!, and others. In 2009, she joined Dancing with the Stars, ultimately placing third in the competition. In 2010, she joined E!’s Fashion Police as a fashion correspondent, a role she would hold onto until 2015. She left the show in 2015 following co-host Giuliana Rancic‘s comments on Zendaya’s dreadlocks. Since then, she’s appeared on shows like Australia’s Got Talent, Ozzy & Jack’s World Detour, and The Masked Singer. In April 2021, she and Jeff Beacher launched a podcast, The Kelly Osbourne and Jeff Beacher Show.

In May 2021, Kelly said she and her older sister Aimee don’t speak often. “We’re just really different. She doesn’t understand me, and I don’t understand her,” she said during an episode of Dax Shepard’s podcast Armchair Expert.

Jack Joseph Osbourne was born on Nov. 9, 1985. Like Kelly, Jack gained fame during the run of The Osbournes. After the show concluded, Jack appeared on a handful of scripted shows, like That ‘70s Show, and on some reality programs like Hell’s Kitchen. In 2005, Jack focused more on fitness and began hosting programs like Celebrity Wrestling: Bring It On!, and his own show, Jack Osbourne: Adrenaline Junkie. The program saw Jack engage in extreme sports and adventures. Jack also appeared on Dancing with the Stars, I’m a Celebrity, Get Me Out of Here! Now!, and the travel series with his father, Ozzy & Jack’s World Detour. In 2020, Jack and his family appeared in the paranormal show, The Osbournes Want To Believe. Jack is also the star of the supernatural investigation show, Portals To Hell.

In 2003, Jack checked himself into Las Encinas Hospital in Pasadena, California, per MTV News, due to addiction to OxyContin. “I took myself out of the picture for a second and I looked around at every single person in the room, at who they were, how old they were, and what they had going on in their lives. A lot of them were near 30, unemployed, living off their parents. There were heroin addicts, there were the world’s biggest couch potatoes. And it was like, ‘I don’t want my life to be controlled by a drug.’”

Jack is also a family man. He and Lisa Stelly welcomed their first child, Pearl, in 2012. They were expecting a second child in 2013, but sadly, they lost the baby due to miscarriage. They welcomed daughter Andy Rose in 2015 and daughter Minnie in 2018. Sadly, they separated later in 2018 and finalized their divorce in 2019.

In 2012, Jack announced that he was diagnosed with multiple sclerosis but has been able to manage the disease with diet, medications, exercise, and therapy.