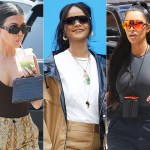 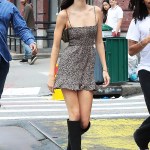 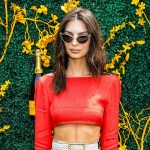 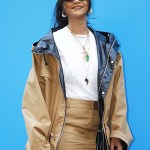 In honor of today being National Sunglasses Day, we rounded up all of the stars who have been rocking the trendiest shades recently!

National Sunglasses Day is officially today, Thursday, June 27, and in celebration of the fun holiday, we pulled together all of our favorite celebrities who have been making a statement this season in trendy shades. Sunglasses are the one accessory that’s an absolute wardrobe staple. Not only do they protect you from the sun, they are also super chic and can complete absolutely any outfit. While a ton of different celebs rock sunglasses all the time, there’s a certain few that are known for spicing up their looks with a cool, on-trend pair of shades that are totally out of the box. Kendall Jenner, 23, can always be found with a pair of sunnies on and the supermodel has been loving a certain shape lately – a skinny black rectangular look. One pair of black sunglasses Kendall hasn’t been able to take off is her go-to Kim Kardashian West x Carolina Lemke Dusk Sunglasses. She’s been wearing them almost every single day with a slew of different outfits, both casual and fancy. When she’s not sporting those, she can be found in a similar style, the Velvet Canyon Zou Bisou Sunglasses, which she just wore with her sexy skintight yellow dress in NYC on June 17.

Aside from Kendall, another model who loves to dress up her look with a pair of sunnies is Emily Ratajkowski, 28, of course. Despite recently wearing similar shades to Kendall, the Kim Kardashian West x Carolina Lemke Tempest Sunglasses, which are also a rectangular shape, Emily is a lover of the feminine cat-eye shade. She’s been sporting the style in a variety of different ways lately, with her favorite pair being the Rixx Scarlett Sunglasses in Champagne. She’s been rocking these sunglasses with a ton of different outfits lately including in NYC on June 21 with her cute yellow floral Realisation Par the Isabelli Dress in Verona, and on June 11, when she took her dog Colombo for a walk in NYC wearing the sunnies with a salmon pink The Line by K Saloma Wrap Dress.

Sisters Kourtney, Khloe, and Kim Kardashian, 38, have always been known for their sunglasses, and they even started the black square Celine and Givenchy sunglasses trend a few years back. Recently, though, the girls have been switching up their looks, and Khloe, 35, just rocked the most insane pair recently. Khloe was out in LA on June 13 when she opted to wear massive black Gucci Shield Gg0540S Sunglasses that basically covered her entire face, paired with Naked Wardrobe Feelin’ Tight Shorts and a purple Balenciaga duster coat. Kim loves sunglasses so much, that she even created her very own sunglasses collection, Kim Kardashian West x Carolina Lemke, which all the celebs have been wearing lately.

There are so many other celebs who have been rocking trendy shades lately. From Millie Bobby Brown’s extra small round sunnies to Rihanna’s quirky shades with colorful lenses — click through the gallery above to see all of the stars rocking cool, trendy sunglasses.