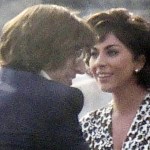 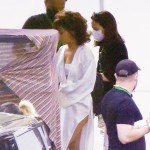 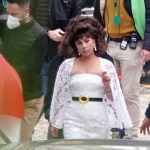 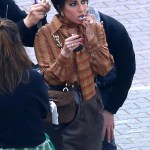 See photos of Lady Gaga as Patrizia Reggiani on the set of ‘House of Gucci.’

Lady Gaga has always been an avant-garde fashion icon, but when she combines her fashionista status with her acting chops, she’s basically unstoppable. The stunning star, 34, is poised to make waves in the fall of 2021 with her upcoming film House of Gucci. Gaga plays Patrizia Reggiani alongside an ensemble cast that includes Adam Driver, Jared Leto, Al Pacino and more. Let’s take a look at some of Gaga’s best costumes from the set of the highly anticipated Ridley Scott picture!

One of the first snapshots that fans got to see of Gaga was from the star’s Twitter account. The Oscar winner posted a photo with her co-star, Adam, all decked out in their Gucci garb. Gaga wore a black turtleneck with layers of necklaces and a fabulous fur hat. Fans also couldn’t help but notice Gaga’s brunette ‘do, which you can just see beneath the hat she’s wearing in the photo above. Adam and Gaga were film a scene in the picturesque setting of n Gressoney St. Jean, Italy, on March 8, 2021, where they looked ready to hit the ski slopes!

Of course, this wasn’t the only vintage, fashionable look that Gaga wore. As the film takes place in the ’90s, there’s a true treasure trove of vintage looks for Gaga to wear. Another such look was the one pictured below, featuring Lady Gaga in a stunning red dress with black pumps and a brown fur coat. Gaga was, once again, decked out in jewels with a statement necklace and drop earrings as she filmed with co-star Al Pacino on March 22.

Gaga has looked absolutely regal and totally in character as Patrizia, the real-life ex-wife of Maurizio Gucci (played by Adam), who plotted to kill her former husband, the grandson of renowned designer Guccio Gucci. The movie is slated for a late fall 2021 release date, and longtime fans of the multi-hyphenate talent cannot wait to see Gaga take on the role. While we wait patiently for the movie’s release, take a look at more photos from the set with the gallery above!