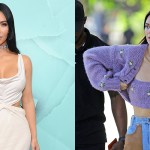 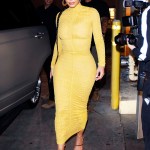 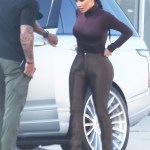 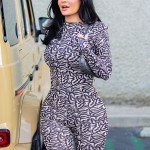 The KarJenners are literally famous for their gorgeous bodies, and all of the sisters love showing off their tiny waists which is why we rounded up all of their most revealing looks!

The Kardashian and Jenner sisters have no problem flaunting their bodies in revealing clothing, and despite all of their different body types, one thing’s for sure — the girls all have tiny waists. As a supermodel, Kendall Jenner, 23, has an insanely long and lean torso, which she shows off at any chance she gets. Kendall did just that when she was out and about in LA on August 28 rocking the tiniest crop top and a pair of mom jeans. She opted to wear a pair of high-waisted, super light-wash straight-leg Yeezy Season 5 Jeans in Indigo Bleach which she styled with a three-quarter sleeve, olive green terry cloth crop top. The collared shirt featured three big tortoise buttons down the front and the top ended just at her breasts, revealing some braless underboob. Since the shirt was so short, her entire stomach was on full display, revealing her insanely toned abs and unbelievably tiny waist. She accessorized the look with a pair of white Adidas Sleek Leather Sneakers, her favorite black rectangle Gentle Monster Chapssal Sunglasses, and a Louis Vuitton Graffiti Pochette Accesoires Bag. Kendall has been showing off her abs and tiny waist a ton recently and just last week, on August 14, she took her dog for a walk wearing a neon green Adidas sports bra with a pair of black biker shorts, Yeezy sneakers, her favorite pair of Kim Kardashian West x Carolina Lemke Dusk Sunglasses, and a cute messy ponytail. That same week, on August 11, she rocked a cute little Zimmermann Heathers Cropped Floral Linen Top, which was more of a bra than a shirt, with high-waisted, baggy dark wash Olivia Oblanc Double Front Frayed Jeans, Adidas Originals Continental 80 Sneakers, a Louis Vuitton Graffiti Pochette Bag, and of course, her go-to Kim Kardashian West x Carolina Lemke Dusk Sunglasses.

Kendall was also spotted getting gas in LA on June 6, when she took it as an opportunity to show off her stunning figure in a pair of high-waisted, fitted skinny leg mom jeans. She paired the pants with a tiny yellow spaghetti strap tank top that featured daisies all over it. The crop top was not only skin-tight, it was super short, showing off Kendall’s teensy, tiny waist. She accessorized her look with black Simon Miller Beep Thong Sandals, a pair of black Kim Kardashian West x Carolina Lemke Dusk Sunglasses, and cute little chunky gold hoop earrings. Kendall showed off her waist again, when it looked the tiniest it’s ever looked, when she was running errands in LA on April 1. She opted for a pair of super baggy and oversized vintage jeans which she paired with an extremely cropped Brandy Melville sweater, accessorizing with a camouflage ’47 Brand New York Yankees Realtree Cap, gray Yeezy Boost 700 Inertia Sneakers, and small black Linda Farrow sunglasses.

Kendall’s older sis, Kim Kardashian, 38, is the queen of highlighting her curvaceous frame in sexy looks, and the mother-of-three has rocked thousands of sexy, skin-baring looks in her day. Some of her most recent outfits, though, seriously take the cake. When she attended the 2019 Met Gala, Kim shocked fans with how tiny her waist looked in her Thierry Mugler dress. The plunging mini dress was made to look like it was wet thanks to its figure-hugging silhouette and hanging crystals meant to replicate water droplets. After wearing the look for the event, based around the theme of “Camp: Notes on Fashion,” the KKW Beauty founder revealed that she needed to take breathing lessons so that she could actually wear the incredibly tight outfit. Now that’s commitment!

But the Met Gala isn’t the only time the reality star has shown off her small waist. Kim opted to wear a skin-tight, neon pink custom Yeezy nylon mini dress for Kylie Jenner’s birthday party back in August. The mini dress was not only super short, the entire waist was cut-out. Since then, her outfits have only gotten sexier. She was in Montreal, Canada on February 25 when she donned an insanely cinched in, white vintage 1994 Mugler dress which featured a strapless top, showing off insane cleavage, and a corset bodice that made her waist disappear.

Kim’s two sisters, Kourtney, 39, and Khloe Kardashian, 34, have both had their fair share of revealing looks, as well. Kourtney, also a mother-of-three, doesn’t wear crop tops or cutouts often, but she still manages to flaunt her waist in either skin-tight pieces or cutouts. Khloe on the other hand, always rocks skin-tight bodysuits tucked into even tighter high-waisted jeans, which accentuates her waist. When she’s not rocking a bodysuit, she can be spotted wearing workout leggings with a crop top or cropped sweatshirt, revealing her bare waist.

Sisters Kendall and Kylie Jenner, 22, are constantly showing off their waists, taking after older sis, Kim. Aside from Kendall, Kylie is always flaunting her waist, but in a totally different way. Kylie’s style is much different than Kendall’s but equally as sexy. One of Kylie’s most recent looks was super sexy as she went to The Nice Guy in LA on March 15 wearing a skin-tight, long-sleeved black Tom Ford jumpsuit that featured massive cutouts on her waist, revealing a ton of skin. Another one of our fave looks from Kylie was her insanely tight strapless black Alexander Wang gown on the red carpet of the 2018 Met Gala. Not only did the dress show off ample cleavage, but there was also a huge cutout on her waist, and the tight fabric cinched in the rest of her waist and behind. Whether it’s crop tops, cutouts, or super cinched in dresses, click through our gallery to see all of the Kardashians and Jenners in revealing looks.