Joe Jonas and Sophie Turner have a lot of firsts this month. — Their 1-year wedding anniversary is on May 1, which marks the first time they said “I do” in a surprise Las Vegas ceremony, following the 2019 Billboard Music Awards. The Game of Thrones actress, 24, and the “Sucker For You” singer, 30, whose relationship began when he slid in her DMs on Instagram, have quite the unique love story. Before we get into the details of their romance, take a look back (in our attached gallery) at Joe and Sophie’s sweetest moments as a married couple!

The singer and actress began dating in 2016, after they were introduced by a mutual friend — despite Joe hitting her up on social media prior to their first meeting. He proposed in September 2017, and they showed off Sophie’s massive diamond ring on social media soon after. That’s when fans started to see just how fun and cool Sophie and Joe truly are are as a couple.

Fast forward to May 1, 2019, and the duo were partying it up in Las Vegas at the Billboard Music Awards. Following the show, Sophie and Joe tied the knot in a spontaneous ceremony at the infamous Little White Chapel — not too far from the MGM Grand, where the awards show took place. Joe and Sophie opted for ring pops instead of wedding bands and their nuptials were officiated by an Elvis Presley impersonator. Thanks to Diplo, fans were able to watch Joe and Sophie get married in real time, when he live-streamed the wedding on Instagram.

The couple’s Vegas wedding was so memorable that Joe thought about re-creating the nuptials for his first wedding anniversary with Sophie. “We legally got married in Vegas, so it’s our Vegas anniversary,” he told James Corden during a virtual appearance on The Late Late Show on April 27 (2020). 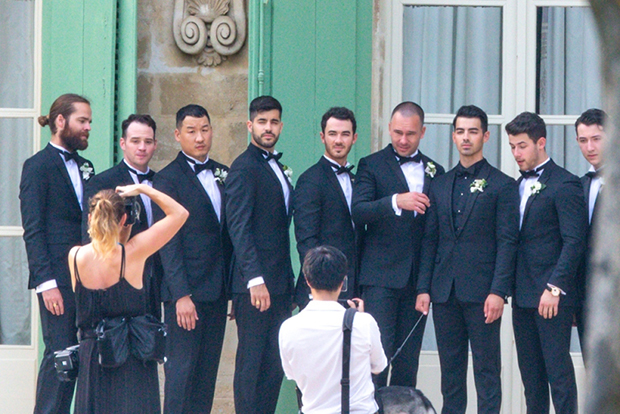 Joe Jonas with his groomsman on his wedding day in the South of France. (Photo credit: Best Image / BACKGRID)

Next up — the bachelor and bachelorette parties. On May 30, Joe threw a bachelor party on a yacht in Ibiza with his groomsman, including brothers Nick and Joe Jonas. Meanwhile, Sophie, along with her GoT co-star (and maid of honor) Maisie Williams, sister-in-law, Priyanka Chopra and friends, enjoyed her bachelorette festivities in the Spanish town of Benidorm.

In June 2019, Sophie and Joe jetted off to the south of France with their closest friends and family for a week-long wedding celebration. — Yes, they had a second ceremony. However this time, it would include actual rings and an officiate who wasn’t an Elvis impersonator. The lavish ceremony took place on June 29 (2019) at the stunning Château de Tourreau in Sarriens, France. The pair later honeymooned in the Maldives.

In January (2020), rumors swirled that they were expecting their first child together! Take a look back at photos from Joe and Sophie’s first year of marriage.