The 2020 ESPY Awards will have a different look and format when the annual sports awards show airs tonight, June 21 at 9 p.m. ET on ESPN. The annual show, which usually takes place in Los Angeles, CA, is going virtual for the first time ever due to the COVID-19 pandemic. As for what will remain the same? — Athletes from the NBA, WNBA, NFL, MLB and more leagues will make impactful appearances! Learn more about the 2020 ESPYS, below:

1. ESPN will air a combined show with the 2020 ESPYS and the Sports Humanitarian Awards. — The network confirmed the latter in a press release in early May. The sixth annual Sports Humanitarian Awards is a celebration of the impact made by athletes, teams and sports industry professionals who are using sports to make a difference in their communities and throughout the world. The 28th annual ESPYS (Excellence in Sports Performance Yearly Awards) recognize individual and team athletic achievements and other sports-related performances. This just means there will be more awards, more amazing stories of triumph and hard work, and more to celebrate! “For six years, ESPN has been honored to telecast the Sports Humanitarian Awards, which highlights the impact that sports has to create social change, and we’re excited to carry that narrative through The ESPYS and our other platforms,” said Kevin Martinez, vice president of ESPN Corporate Citizenship.

A night to celebrate hope, service and perseverance.

The 2020 @ESPYS air tonight at 9 PM ET on ESPN. pic.twitter.com/AHyOa5sZDn

2. Who’s hosting? — Seattle Seahawks quarterback, Russell Wilson, U.S. Women’s National Soccer Team co-captain Megan Rapinoe and three-time WNBA champion Sue Bird will host the show — making this the first time three people will serve as MCs. All three athletes, who live in the Seattle area, recorded their virtual hosting duties from home. Megan and Sue are partners who share the same household. Russell resides in Seattle with wife Ciara and their kids, Future Jr. (who she shares from a previous relationship) and Sienna. Ciara, who will likely make a virtual appearance tonight, is currently pregnant with the couple’s third child, a boy. 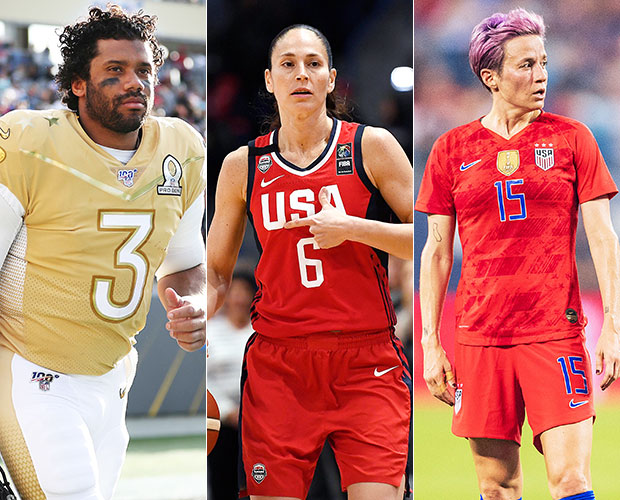 3. How will the virtual format work? — Producers hope to show the winners getting a call informing them of their award at the same time the audience finds out, ESPN explained in a press release. That process involves the network and producers teaming up with families and team members to lure the winners to a video screen at the appropriate moment. ESPN noted that the show is taking a forward-looking approach rather than lament what the world has endured during the COVID-19 crisis.

.@kevinlove sharing his struggles with mental health has had effects that go beyond basketball.

For his advocacy, he will be awarded the 2020 Arthur Ashe Courage Award at the @ESPYS. pic.twitter.com/KO1Wa843Br

A new award, the Sports Philanthropist of the Year Award, will go to the individual(s) who create measurable social change through sports by using a comprehensive philanthropic funding strategy. Other notable awards include: the Stuart Scott ENSPIRE Award, the Billie Jean King Youth Leadership Award, the League Humanitarian Leadership Award, the Pat Tillman Award for Service and the Jimmy V Award for Perseverance.

5. There won’t be a red carpet. — Unfortunately, viewers won’t get to see their favorite athletes and stars in their Sunday best, or witness candid red carpet moments. However, the at-home aspect is sure to bring a newer and more personal vibe to the show!