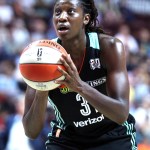 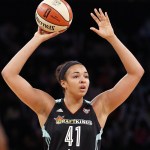 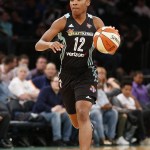 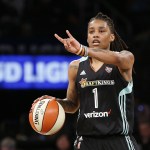 Despite how far we’ve come, there’s still more work to be done when it comes to equality for women in sports. Former WNBA pros Jamila Wideman and Ashley Battle break down the stereotypes of the hot topic, and reveal how YOU can make a difference!

A raw and candid conversation that’s been long overdue in the sports space happened right at HollywoodLife during International Women’s Month in March. Former WNBA players Ashley Battle and Jamila Wideman joined us for an emotionally powerful round table for an in-depth discussion about women and equality in sports. The former pros tackled the heavy topic of the stigma around women being less tough or knowledgable than men in the sports space, and how we can help shift the narrative. Wideman and Battle were also on hand to explain how the National Basketball Association is creating careers for players after retirement through its Player Development Department and its Basketball Operations Associate Program — a branch of the NBA Career Crossover Program, which is designed to help former players with a productive transition following their playing careers, with a specific focus on gaining the necessary training and experience to work in a team front office.

Jamila Wideman, the current Vice president of Player Development in the NBA, was drafted 3rd overall by the Los Angeles Sparks in the summer of 1997. She went on to become a lawyer after retirement, before she returned to the league post-retirement to help her fellow players in their own transitions off the court. “The program is intended to launch player’s into what’s next,” she said during HollywoodLife’s round table discussion. “Players are incredibly talented on the court and had amazing careers. Now, we’re invested in helping them figure out what is next and Ashley has been an amazing example of the fact that she was first in class on the court and we think her potential of the court is just as needed.”

Ashley Battle, who joined the league as a Basketball Operations Associate for the NBA in December 2018, also took a different path upon retirement. She was drafted 25th overall to the Seattle Storm and played six years in the WNBA for the Storm, New York Liberty, San Antonio Silver Stars, as well as for international teams in Spain and Turkey. When she hung up her jersey, Battle worked in finance until an unexpected opportunity reunited her with her first love — basketball.

Wideman and Battle went back and forth at HollywoodLife’s roundtable, where they spoke candidly about female equality in sports and explained their unique stories on and off the court. Their discussion was condensed with excerpts below.

Why in 2019, are there still stigmas around women playing sports and being “lesser” than men, according to some critics. Can you speak on that and the equality or lack there of when it comes to female athletes?

AB: I literally see this conversation every day on Facebook. I think people can be ignorant. Every day, there’s someone coming up to me saying something like, ‘Because I’m a guy, because I’m tall, I can beat you [in basketball].’ I’m like, ‘But, you’ve never played, so how are you going to say just because I’m a female, that you can beat me?’ I understand that because I’m female, I don’t have the same physicality’s as men, you may be stronger than me. I’m happy you’re confident in yourself, but that’s probably not the truth. I just don’t think people understand that we’re professionals, we’re talented, we work out just as much as the guys and we put forth just as much effort to master our craft. We understand what it takes to be the one percent of the one percent that’s going to play professional.

JW: I think part of the challenge too is the conversation around the WNBA is so much bigger — it’s about powerful, confident, assertive women, period. What’s true is, that’s still a difficult conversation, whether you’re talking about the WNBA or any industry about women being successful. I would say, in the athletic realm, the WNBA is a representation of women in sport. As a culture, we are still working on how to expand the box and figure out how to show the fantastic, fabulous versions of who a woman can be. To the extent that the WNBA is pushing that box outwards and upwards, we’re doing our job. We’re part of a larger movement.

But, the truth is, whether its a movement or not, at the end of the day, we’re people, we’re individuals forging the way in a place that hasn’t been completely blazed before. So, Ashley followed me and there’s a little girl out there that’s following Ashley. And, Ashley’s story is different than mine. The fact that we’ve made it or we’ve achieved, there’s no equation to that success. So, when we think about diversity, it’s not just us women in this space — it’s also that there’s diversity in the stories that other WNBA women who are participating, have. I think the more we can tell those stories, and the more we can point out how different they are, the more we can show how many paths there are to success. That’s when we’re really addressing the important questions, which is not just saying, ‘I’m a woman and I play sports, but ‘let me actually tell you about everything else that I am.’

How else can we try and ‘expand the box’ as individuals, especially in a day where social media creates questionable narratives?

JW: We have to be ready to be in conversation at all times and in all places. But, it also means there has to be an audience to some degree willing to listen. You have to find a point of commonality, to the extent that our stories are about imagining yourself as something when there’s no example of someone out there who doesn’t look like that, or who’s never done that… Recognize me for who I am, not who you need me to be.

How has the transition been for you [Ashley] from the WNBA to the Basketball Operations Associate Program?

AB: Prior to me coming to the league, I had a little stint in financial services, actually. I had an injury, which really ended my career and I had a love/hate relationship with the sport then, because I thought that I had the ability to come and play again and that just didn’t work out for me. To be honest, I wasn’t actually healthy enough to do it and it was very hard, mentally. I’m very fortunate to have a great support system. [Battle credited a special moment she had with her mother for helping shift her mentality after her injury. Her mother pushed her to move forward during a playfully competitive game of Guitar Hero at home.]

From there, I went to work at a bank and I ended up leaving there and coming to CT where I worked at a few other financial branches that worked with athletes. Then, I got back into the groove of it — I was running around with agents and athletes and I realized something was missing. It was ironic, I saw something posted online about if any former athletes were interested in player development positions with the league. The application said if you were able to make it to Summer League in Vegas you could meet more people to be considered for the program, so I went! I gave them a call and here we are!

AB: Back when I was trying to figure out what I wanted to do, I was fortunate enough to have a strong family, but I was really able to say, ‘You should have planned prior and leveraged the opportunity you had.’ If there’s anything I would tell current athletes, it would be to leverage your platform! A lot of people want to talk to you and you have the resources at the league that want to hire athletes. So, you have to know these programs are happening and don’t be afraid to reach out, because people want to help.

JW: I think there’s points that you mentioned, Ashley, that are crucial. That’s why the programs we run begin with conversations with young men and women who are elite players, even in high school. We’re having conversations about how they can get better, not only on the court, but how important it is for them to develop themselves off the court. And, those are the conversations we continue in our Rookie Transition Program when players are getting ready to go from being one of the best high school or college players, to over night professionals. So, we think part of what it means to be professional, is to embrace your whole self. The program is designed to help players explore that, to get stronger and to recognize places where they need development and it’s our job to listen very well.

You mentioned mental health, Jenna. — Our players have been incredibly brave and leading the way. And, what Ashley described, kind of losing your identity when you transition because you’re missing that structure you had being on a team. And, you realize you’re a pretty young person retiring and you have the best years of your career ahead of you. You can’t listen to someone like Ashley for more than 10 seconds and not recognize that she has tremendous talent and I think like most of our players, her sense of curiosity, creativity and interest in a lot of things is wonderful. So, we think it’s worth investing resources in that!

AB: When you really think about it, most of us [players] have played basketball since we’re little kids — it’s all we know, it’s our first love. Then, for it to be like, ‘You don’t have this anymore,’ and you’re in your 30’s or some players that are fortunate enough to play into their 40’s. It’s a difficult transition to have. I’ve been blessed and our players need to know the resources are there to help them. Sometime’s you’re at a loss for words, like, ‘What is next? What is there out there to do?’

JW: What this program brings back to the league is incredible — the way our office runs. I can’t tell you how many times, people from all different departments seek out conversations with Ashley or the other operations and associates because the insights the former players have are critical, not only to how we preserve the game on the court, but it’s critical to the business. There is certainly a lot to be gained as a former player participant and its invaluable enrichment to the league, which the league acknowledges.