The 2020 ESPY Awards are tonight and Kevin Love is a name you’re going to hear quite often. The NBA power forward, 31, will be honored for his incredibly impactful work off the court, which includes his openness and advocation about mental health. Here’s five quick facts about Kevin, who is up for multiple awards when the ESPYS airs on ESPN, June 21 at 9 p.m. ET.

1. On the court. — Kevin Love is a 6-foot-10 power forward/center for the National Basketball Association. He currently plays for the Cleveland Cavaliers and won an NBA championship with the team, alongside his good friend LeBron James in 2016. He’s a five-time NBA All-Star and won gold with the United States national team at the 2010 FIBA World Championship and the 2012 Summer Olympics. He’s the son of former NBA player Stan Love. Kevin played one season of college basketball with the UCLA Bruins and led the team to a Final Four appearance in the 2008 NCAA Tournament. He was selected fifth overall in the 2008 NBA Draft by the Memphis Grizzlies, and was traded to the Minnesota Timberwolves on draft night for the third overall selection.

.@kevinlove sharing his struggles with mental health has had effects that go beyond basketball.

For his advocacy, he will be awarded the 2020 Arthur Ashe Courage Award at the @ESPYS. pic.twitter.com/KO1Wa843Br

2. Off the court. — In 2018, Kevin penned a candid, personal essay about a panic attack he experienced during an NBA game the year prior. From that day on, he’s been a spokesperson for mental health and wellness. Kevin is one of the first athletes to speak out about his struggles with mental health. Kevin continues to encourage others to share their stories and constantly works to help shift the stigmas around mental health issues. He created The Kevin Love Foundation to help prioritize mental health.

The @ESPYS are giving @KevinLove the Arthur Ashe Courage Award for taking something few in sports wanted to acknowledge and turning it into something everyone could feel comfortable talking about. Congratulations to Kevin, @shannonmcgauley and everyone at the @KevinLoveFund pic.twitter.com/pq9ep1JTTs

3. He founded The Kevin Love Fund. — In conjunction with his fight to prioritize mental health, Kevin created the fund to inspire people to live their healthiest lives — while providing the tools to achieve physical and emotional well-being. Kevin speaks at conferences and other events. During the coronavirus pandemic, he offered advice and counsel on coping. 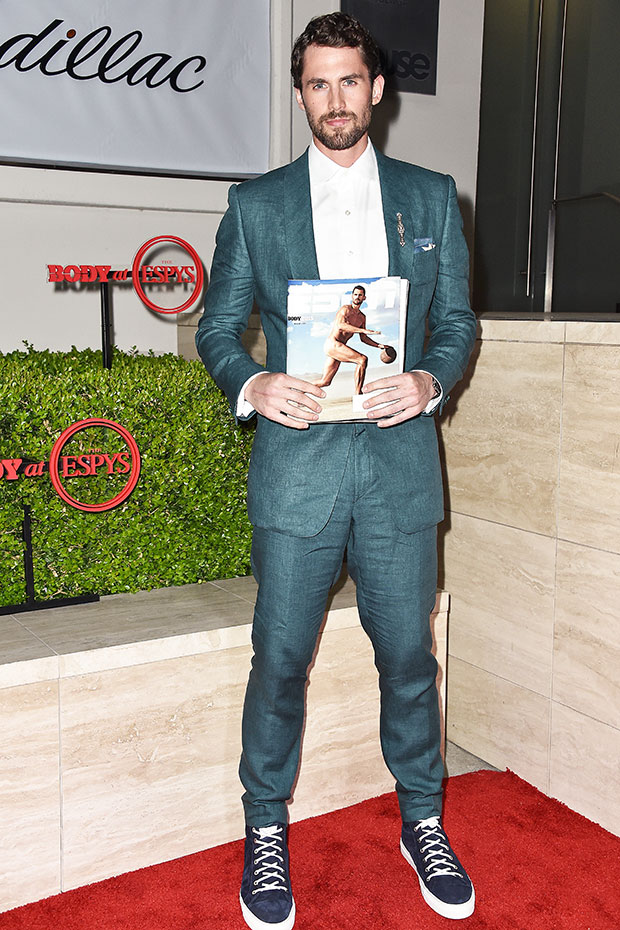 4. Kevin is an animal lover and activist. — He has a dog named Vestry with his girlfriend, Sports Illustrated model, Kate Bock. They often share videos with their pup, who’s always up for an adventure, just like her parents. The pair loves to travel the world and explore different places, cultures and cuisine.

5. He has his own collection with Banana Republic. — Kevin made his debut as a fashion designer in 2018 when he released his first collection of menswear, BR/K.LOVE-18 with the brand. Before that, Kevin had been modeling for the retailer since Spring 2016.