Who knew wearing sweats was such an art? These days, a lot more goes into getting dressed for the grocery store or the coffee shop. Just ask stars like Teresa Giudice and her daughters,  Blac Chyna, Hailey Baldwin, Gigi Hadid, Olivia Culpo, Kylie Jenner, and more who’ve led the latest fashion trend — matching athleisure. This includes matching workout sets and sweatsuits in all colors and different patterns. Take a look at your favorite stars styling in sweat sets in our attached gallery!

Real Housewives of New Jersey star Teresa Giudice twinned with her oldest daughter Gia, 20, in matching sports-bra crop tops and leggings as they went for a hike in the Hollywood Hills on Jan. 21, 2021. The 48-year-old donned a shiny red athleisurewear set by Electric Yoga, while Gia wore grey leggings and a black top. Tre’s 14-year-old daughter Milania also flaunted her abs in a black crop top, but went with nearly knee-length bike shorts.

Blac, 32, was out in Malibu on July 16 when she looked super cozy and stylish in a head-to-toe white tracksuit. She rocked a zip-up turtleneck sweatshirt with snakeskin stripes down the arms and styled it with a pair of matching baggy sweatpants, which also had stripes down the sides of the legs. She accessorized her look with a pair of socks and oversized white slip-on slide sandals, a white beanie hat, massive pink sunglasses, and a blue Louis Vuitton purse.

Olivia has made her love for matching leggings and crop tops well known on social media. She spent the Easter holiday in a bright blue workout set while quarantined with boyfriend Christian McCaffrey at his parents’ home in Castle Rock, Colorado. The model shared a group snap with her sister Sophie Culpo (who’s quarantining there too), along with the NFL quarterback’s mother, and a friend — all sporting pairs of matching pastel leggings and tops. 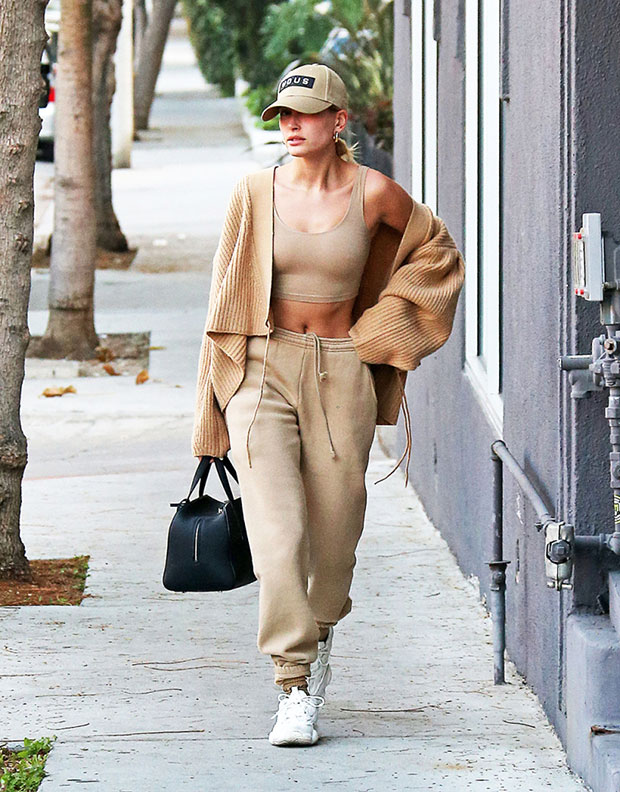 Hailey Baldwin out in a beige sweatsuit in Los Angeles, CA on February 17, 2020. (Photo credit: Shutterstock/SplashNews)

One thing to know about this trend is that it’s totally versatile. Stars have been rocking their sweat sets beyond their living rooms and elevating their leisure looks with designer pieces and accessories. Priyanka Chopra was spotted out in New York in a matching cream-colored sweatsuit with a formal peacoat over it. She carried a light beige tote and rocked red-tinted glasses during the outing.

For some stars, the matching trend stretches beyond tops and bottoms. Mrs. Bieber is one celeb who’s known to coordinate her athleisure attire with her accessories. The model was photographed meeting husband Justin Bieber in LA wearing back in February wearing camel-colored sweats, paired with a matching sweater and hat of the same color.

It’s hard to imagine what sweats looked like before the matching movement took the fashion world by storm. But, we’re loving it! Check out Hollywood’s hottest stars rocking the trend in our attached gallery.