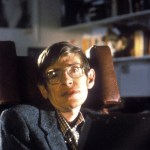 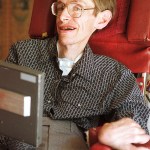 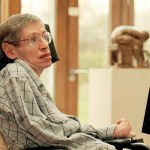 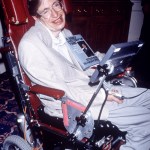 Bio:
Stephen Hawking (born Stephen William Hawking on January 8, 1942 in Oxford, England) is a British theoretical physicist, author and cosmologist. At an early age, Stephen showed a passion for science and the sky. He was a bright but not exceptional student. He was an active child, loving to dance and involved in rowing, even when he enrolled in Oxford University at age 17. During his time in school, Stephen noticed he would stumble or his speech would slur. He was diagnosed with ALS in 1963. He was confined to a wheelchair by 1969 and he focused his efforts on his research, publishing his first book in 1973. His work on Black Holes turned him into a celebrity. From the 1970’s on, he has been on a path of success and respect in the science world. His most famous work, A Brief History of Time, was published in 1988. Stephen lost his voice in 1985 and has been communicating with a computer program since then. He has appeared as himself in episodes of Star Trek: The Next Generation, Futurama and The Big Bang Theory. He was the subject of the 2014 biopic, The Theory of Everything. He was portrayed by Eddie Redmayne.

Best Known For:
Stephen Hawking is best known as a physicist.

Personal Life:
Stephen comes from a family of thinkers. Both his mother and father graduated from Oxford University. He married his first wife, Jane Wilde, in 1965. They had three children – daughter Lucy and sons Robert and Timothy. Stephen left Jane in 1990 and the two divorced in 1995. Stephen married a nurse, Elaine Mason, that year. They divorced in 2006.