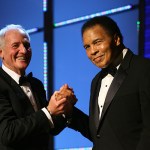 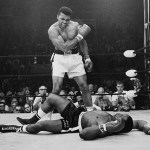 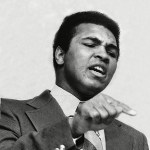 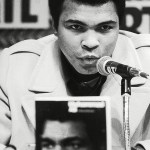 Bio:
Muhammad Ali (born Cassius Marcellus Clay, Jr. in Louisville, Kentucky on January 17 1942) is an American former professional boxer, philanthropist and social activist. When Muhammad was 22-years-old, he won his first world heavyweight championship. He joined the Nation of Islam in 1964, and then converted to Sunni Islam in 1975. In 1967, Muhammad was publicly vilified for his refusal to be conscripted into the U.S. military, which he had refused to join due to his religious beliefs and his opposition to the war. He was arrested and found guilty on draft evasion charges and he was stripped of his boxing title. He appealed to the U.S. Supreme Court, where he won the right to box again. Muhammad is the first and only three-time lineal World Heavyweight Champion.

Muhammad’s boxing match against rival Joe Frazier is considered among the greatest in boxing history, and he was crowned “Sportsman of the Century” by Sports Illustrated and “Sports Personality of the Century” by the BBC in 1999.

Best Known For:
Being a professional heavyweight boxer, and for his catchphrase “float like a butterfly, sting like a bee.”

Muhammad Ali’s daughter and grandson share some of their favorite memories about The Greatest Of All Time five years after his passing.

Will Smith, who famously played Muhammad Ali in a Oscar-nominated movie about the late boxing legend, is absolutely distraught with the sad news of Muhammad’s passing, admitting in his own moving tribute, ‘You Changed My Life.’ And HollywoodLife.com has the EXCLUSIVE details how he’s feeling right now.
Will Smith, 47, is just devastated after the death of Muhammad Ali, who passed away on June 3 aged 74. The Oscar-nominated star released his own statement about the man he got to know so well while filming the 2001 biopic Ali. And as HollywoodLife.com can EXCLUSIVELY reveal, it’s shaken him up really badly that his ‘mentor’ is gone.

Besides just an amazing boxing career, Muhammad Ali also had a pretty crazy personal life! Did you know he was married four times and has nine children?! Here’s everything you need to know about his relationships.
Muhammad Ali had a pretty crazy love life! As we continue to mourn the tragic loss of the greatest boxer of all time, we’re taking a look back at his plentiful relationships — because the timeline of his romances his a bit confusing. Catch up here.

The world is absolutely devastated over the loss of Muhammad Ali, and we can’t even imagine what his family is going through. The legendary boxer left behind nine beautiful children, but his history with relationships and family is a bit complicated. Catch up here!
Muhammad Ali was so much more than just a legendary boxer, and when he wasn’t in the ring, he was raising a gorgeous family, including nine kids. Here’s everything you need to know about the GOAT’s children and the five different women who are their mothers.

The world lost a legend when Muhammad Ali died on June 3. As fans continue to mourn the tragic loss, boxing champ, Floyd Mayweather paid homage to the late icon with a sweet Instagram tribute. Read it htere.
Floyd “Money” Mayweather, 39, wrote a beautiful message to Muhammad Ali, after hearing the news that the legend died on June 3. Although the boxing champions had a rocky relationship once, its clear that Floyd respected the contribution that The Greatest made to the sport they both loved.

George Foreman, Muhammad Ali’s opponent in the legendary ‘Rumble in the Jungle,’ just paid tribute to the late boxing legend, hours after he passed away on June 3. Keep reading for his amazing tribute to the greatest boxer who ever lived.
So heartbreaking! George Foreman, 67, is remembering his fierce opponent and later his close friend Muhammad Ali who passed away on June 3 at the age of 74. The pair made boxing history in 1974’s “Fight of the Century” where The Greatest won back his Heavyweight title from George, and now he’s remembering his pal with such love.