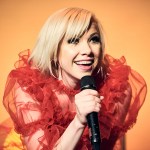 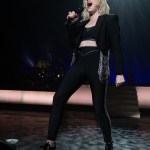 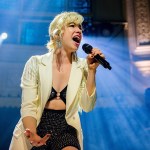 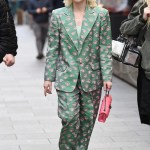 Bio:
Carly Rae Jepsen (born in Mission, British Columbia on November 21, 1985) is a Canadian recording artist and songwriter. Jepsen is best-known for her hit single “Call Me Maybe.” She gained fame by placing third in the fifth season of Canadian Idol. By being on Idol, Jepsen landed a record deal with Simkin Artist Management and Dexter Entertainment. After producing a record with them, Carly was onto her next deal with Fontana/Maple Music in which she produced “Call Me Maybe.” Carly opened for Justin Bieber’s “Believe Tour” in 2012.

Best Known For:
Her hit single, “Call Me Maybe.”

Personal Life:
Jepsen grew up in Mission, British Columbia and attended Heritage Park Secondary School. Next, she went to attend the Canadian College of Performing Arts in Victoria, BC.

There’s no ‘maybe’ about it – Carly Rae Jepsen just nailed the Canadian national anthem. The ‘Call Me Maybe’ singer sung a sweet version of ‘O Canada’ ahead of the NBA All-Star game!

Carly Rae Jepsen is just hours away from her NBA All-Star debut, where she will sing the Canadian national anthem ahead of this year’s game in Charlotte, NC! Here’s a few facts about the singer before she takes the stage!

This is what we, in the music-loving industry, refer to as a straight up banger. Carly Rae Jepsen has just dropped a new single, ‘Making the Most of the Night,’ and it is hotter than the summer nights you’re going to spend listening to it.
Carly Rae Jepsen is no one hit wonder, and she is going to make damn sure you know it. Her new single, “Making the Most of the Night,” dropped on Aug. 7, just in time for the weekend and oh lord is it good. Off her upcoming album, E•MO•TION, the song is equal parts care-free summer jam and anthemic power cut. In other words, why aren’t you already listening to it, and then listening to it again on a loop for the next few hours?