Leave it to Miley Cyrus to make sure 2023 started on the right foot. Two weeks after welcoming in the New Year in epic fashion, Miley, 30, released “Flowers,” on Jan. 12, the first single from her upcoming album, Endless Summer Vacation (out March 10 on Columbia Records) — and she’s certainly blooming. The music video for “Flowers” starts off on a solemn note, as she sings about the life she and her ex-husband, Liam Hemsworth, built together. “We were good, we were gold, kind of dream that can’t be sold. We were right ’til we weren’t, built a home and watched it burn,” she began, referring to the California wildfire that burned down their Hollywood home in 2018.

The song quickly changes pace once Miley gets to the chorus and remembers that she can love herself endlessly. “I can buy myself flowers, write my name in the sand. Talk to myself for hours, see things you don’t understand,” she sings as she dances up the driveway of a modern mansion perched on a hill. “I can take myself dancing and I can hold my own hand,” she continues in the chorus. “Yeah, I can love me better than you can.”

The former Disney star continues on her path of realization by singing joyfully about all the things she can do for herself with “no regret”. Visually, she strips down to a lacy, black underwear and bra set she models while swimming and working out in the spacious abode. She then goes naked or a hot and steamy shower as she dances and sings, “I can love me better.” It doesn’t get more empowering than that!

By the end of the video, a fresh-showered Miley puts on an oversized black suit, wears nothing underneath. She dances around the house in the dark, free as a bird.

Fans were first teased that something big was coming from Miley in the weeks leading up to New Year’s Eve. “NEW YEAR, NEW MILEY,” read the billboards that popped up in Los Angeles during the weekend of Dec. 16. The billboards showed the lower half of a body wearing a red thong, suggesting that this New Miley might still showcase some skin in her Endless Summer Vacation era — nothing new for her, of course.

In addition to that, Miley launched a countdown clock on her official website, which was set to reach 00:00 on Jan. 1, 2023. This coincided with her hosting her second Miley’s New Year’s Eve Party from Miami, which she co-hosted with Dolly Parton. When midnight arrived, Miley announced that her new song, “Flowers,” was on the way. Ahead of the release, she posted snippets from the video, including her naked shower scene. 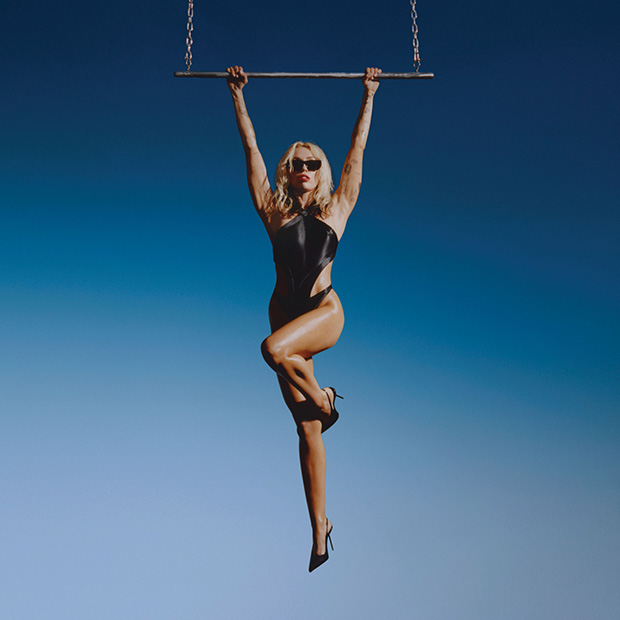 Less than a week after ringing in 2023, Miley announced that she would release her eighth studio album, Endless Summer Vacation, on March 10. The album features production from Kid Harpoon, Greg Kurstin, Mike WiLL Made-It, and Tyler Johnson. The cover, photographed by Brianna Capozzi, sees Miley pose as if she was the long-lost daughter of model and actress Angelyne while dangling from a trapeze, as seen above.

There had been a lot of speculation that Miley’s comeback would happen this year. On Dec. 27, Pop Crave tweeted that Miley would release a new album called Ever Since Venus, and it would arrive on Jan. 13. Of course, this was proven false. There was also speculation that Miley’s new single would be called either “R3SET” or “The R3SET” after Miley’s friend and longtime collaborator, Mike WiLL Made-It, tweeted “THE R3SET – 2023” on Dec. 19, 2022.

Miley’s last album before Endless Summer Vacation was 2020’s Plastic Hearts. Considered her “divorce album” because it followed her 2019 split from Liam, it was also Miley’s fourth and final album with RCA (she would later sign with Columbia Records in 2021). Plastic Hearts was considered a departure for Miley, as she embraced rock, synth-pop, and glam on the LP. The album featured appearances from Billy Idol (“Night Crawling“), Joan Jett (“Bad Karma”), and Dua Lipa (“Prisoner“), with Stevie Nicks lending her vocals to the “Edge of Midnight (Midnight Sky Remix)” on the digital and vinyl version.

Critically, Plastic Hearts was well received, earning an overall Metacritic score of 75 (her highest yet). “The new tracks feel particularly crisp and cohesive, easily her most captivating and keenly focused record yet,” wrote Bobby Olivier for SPIN magazine. “Cyrus has long drawn comparisons to her godmother Dolly Parton’s voice — see her instant-classic rendition of ‘Jolene’ — but here, she’s finally achieved the Tennessee queen’s knack for telling a vivid story,” wrote Claire Shaffer for Rolling Stone. “Even without her current incarnation’s spunky sneer and platinum shag, Cyrus still has teeth, though this algorithmic ‘rock’ can filter out her bite at times. Still, this might be Cyrus’ most successful pastiche yet,” wrote Katie Moulton for Consequence.

Commercially, Plastic Hearts encountered some issues. The singles performed okay: “Midnight Sky” reached No. 14 on the Billboard Hot 100, “Prisoner” tapped out at No. 53, but “Angels Like You” failed to chart. The album peaked at No. 2 on the Billboard 200, and Miley vented her frustrations over the apparent issues with fans finding physical copies in stores.

“My fans are everything to me & to know y’all are disappointed when going out to stores/calling/ checking stock to be let down, I am equally/if not more frustrated,” she wrote on Nov. 29, 2020. “When choosing 11/27 THE SUGGESTED DATE for album release my team and I were never told major retailers don’t stock physical albums on Black Friday and won’t get copies of PH until a few weeks after release.”

“The packaging of the record is intimate, honest, and a visual reflection of the sound of my new record that I am so proud of,” the “Wrecking Ball” songstress added. “It was created BY ME personally at home making art FOR YOU. I want it in your hands! … This album was a labor of love, and nothing can sabotage my admiration for the record my collaborators & I have created.”