Miley Cyrus and Liam Hemsworth are over for good. The actor, 29, has filed for divorce from the singer, 26, citing “irreconcilable differences” on Wednesday, August 21. Liam filed the papers just 11 days after a rep for Miley confirmed that the couple had decided to “separate,” in a statement on August 10. TMZ first reported news of the divorce. Liam and Miley’s split, and subsequent divorce filing, came just eight months after they tied the knot in an intimate ceremony in Tennessee. Before that, Miley and Liam had been together, on and off, for about 10 years. The three page document, (two of the pages are below), can be seen in full in the attached gallery.

Luckily, the now ex-couple had a prenup, according to the court documents, meaning their individual earnings since the marriage will remain separate — therefore avoiding money disputes. Additionally, the exes did not have children, so a custody battle won’t be an issue. Liam did not ask for any spousal support and divorce document states that all assets and obligations are separate and covered by their prenuptial agreement and that there are no community assets.

While Liam and Miley’s separation was confirmed on August 10, the divorce documents don’t appear to confirm when the now ex-couple actually separated. Liam’s lawyer, Laura Wasser — whose roster of celebrity clients includes, Kim Kardashian, Ryan Reynolds, Heidi Klum, Ashton Kutcher, Christina Aguilera and Johnny Depp — does not list a date of separation in the legal documents. It reportedly reads TBD (to be determined). 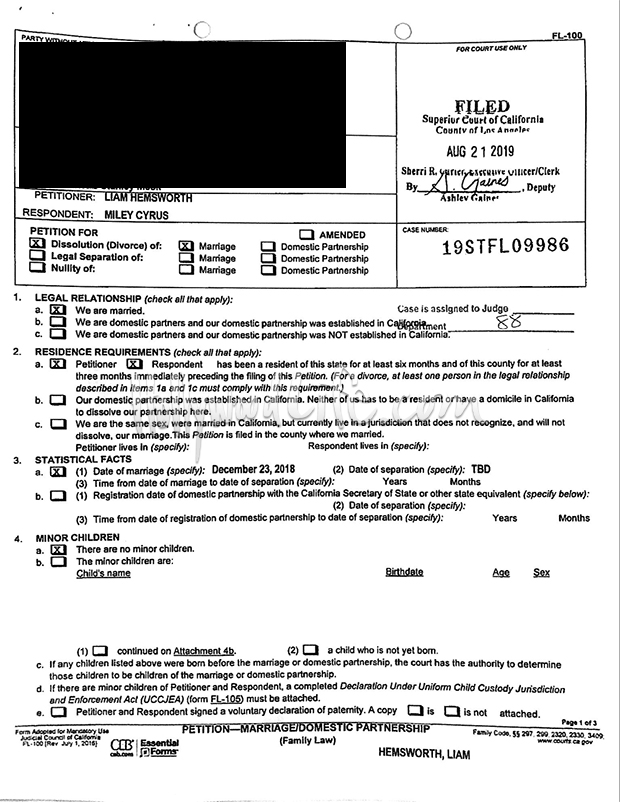 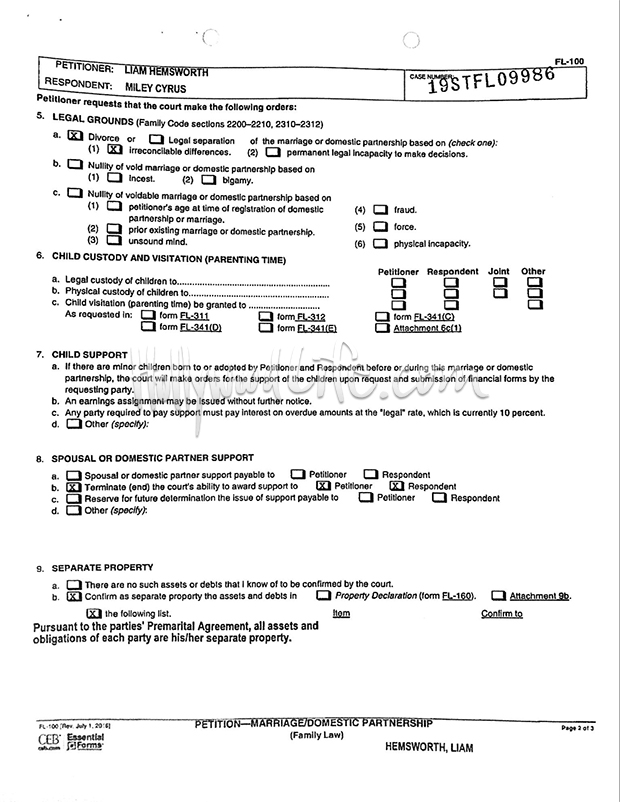 Liam has been spotted in Byron Bay, Australia with friends and his brother, Chris Hemsworth in the days since the split news broke. The actor is “over the marriage” and is focused on moving on, sources tell TMZ.

Although Miley was photographed kissing Brody Jenner‘s ex-wife, Kaitlynn Carter as news of her split with Liam broke, the site claims the singer made attempts to save her marriage as recently as this week. Miley said she wanted to work on their marriage, but it was Liam who put the kibosh on that idea, their sources say. Liam’s “people” even said the actor would be “insane” to get back with Miley, the sources add.

Miley continues to spend time with Kaitlynn, as the two were most recently spotted shopping together on August 17, along with the singer’s mother, Tish. Before that, Miley and Kaitlynn were reportedly seen packing on the PDA at Soho House in West Hollywood on August 16. “They were obsessed with each other,” an alleged witness told Page Six. “They couldn’t keep their hands off each other. They were kissing and making out everywhere. In the bathroom, at the bar, in the middle of the floor. There’s no question they’re together.”