President Joe Biden slammed President Donald Trump for “abusing the constitution”‘ during his special guest appearance on Jimmy Kimmel Live! on Wednesday, June 8. The President’s comments came as Jimmy Kimmel, 54, asked him if he could install gun control measures with an “executive order.”

President Biden explained why he was wary of overusing his executive power, and in the process, skewered his predecessor. After admitting he’s done “everything within the power of the presidency”, he said, “What I don’t want to do — and I’m not being facetious — I don’t want to emulate Trump’s abuse of the Constitution and Constitutional authority. I mean that sincerely, because I often get asked, ‘Look, the Republicans don’t play it square. Why do you play it square?’ Well, guess what? If we do the same thing they do our democracy will literally be in jeopardy. Not a joke.” 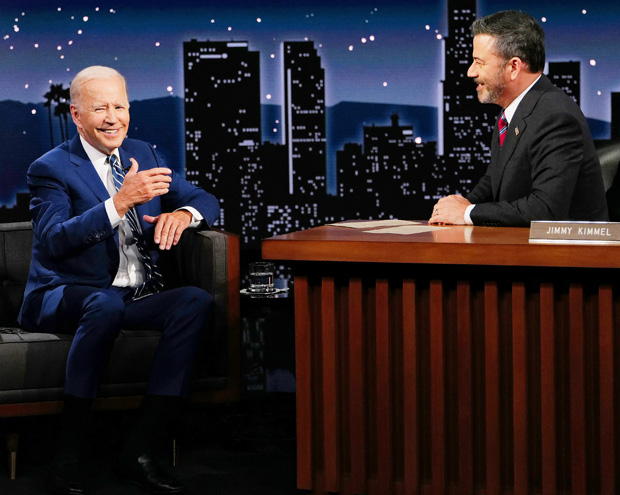 Kimmel had shared that POTUS would be joining the show on Sunday, June 5. He teased that the interview would have “No malarkey” in a tweet, announcing the appearance. This will be Biden’s first late-night appearance, since he joined Jimmy Fallon on The Tonight Show in December 2021, according to The Associated Press. While it’s his first appearance on a late-night show in months, it is the first time the president will appear in person for a late-night talk show since his election.

Biden’s appearance came the night before the January 6 committee is holding a public hearing in primetime on Thursday, January 9. The President hasn’t been shy about using humor to help highlight important issues, and he’s referenced the insurrection in his speeches, occasionally making light of the day. When Republicans threatened to take away Disney’s special tax credit over the company’s opposition to Florida’s “Don’t Say Gay” bill, Biden likened the attacks against Disney to the insurrection. “It’s one thing to take on Disney World. They’re going to storm Cinderella’s castle before this is over,” he said during a speech.

Related: Ketanji Brown Jackson: 5 Things To Know About The Supreme Court Justice Confirmed By The Senate

Unsurprisingly, Biden has been outspoken on a number of political issues ahead of his appearance. After the leaked Supreme Court decision to overturn Roe V. Wade was reported, the President spoke out against the possible ruling in a statement. Following deadly mass shootings in Ulvade, Texas and Buffalo, NY, Biden made a visit to the town where the Texas shooting took place, and he condemned white supremacy in a statement following the Buffalo shooting.