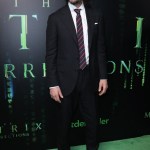 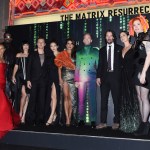 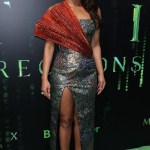 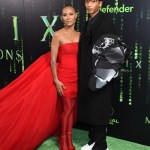 Priyanka Chopra paid tribute to her character Sati in the new film with a futuristic dress in the same colors as her on-screen costume.

Priyanka Chopra, 39, looked stunning at the premiere of The Matrix Resurrections. The actress wore a sparkly silver gown with a high slit and rust-orange shoulder cover designed by Halpern for the red carpet event in San Francisco on Dec. 18. Priyanka paid tribute to her character Sati in the film with the dress, which was made out of similar colors to the on-screen costume she’s seen wearing in the film (particularly the orange).

The star posted a behind-the-scenes shot in the dress snapped by Amber Asaly. “What a night! The Matrix premiere!” she gushed in the caption, going on to shout out her stylist Law Roach and glam team. “Also @luxurylaw brought it! The colors of my dress are an ode to my character in the film, Sati. I can’t wait for all of you to meet her!!” she also wrote, signing off with a tribute for the film’s writer and director Lana Wachowski. Priyanka’s hair was done by celeb hairstylist Bridget Brager using Anomaly Haircare. 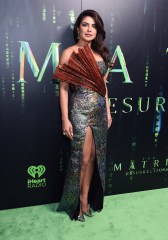 “So proud of this cast and crew. What an honour. Thank you Lana. @TheMatrixMovie #MatrixResurrections,” Priyanka concluded. She accessorized her Halpern gown with jewels from luxury brand Bvlgari, who she has an active partnership with. A sparkly pair of sky-high Christian Louboutin heels also made the look, perfectly matching the red carpet gown.

Earlier this week, Priyanka appeared on co-star Jada Pinkett-Smith‘s Red Table Talk alongside Keanu Reeves, 57, and Carrie-Anne Moss, 54, where she discussed her role. “I think the Matrix trilogy changed cinema. I remember when the first Matrix came out so clearly. I was 16. I remember how it shifted culture, in terms of the questions and themes it treaded upon in terms of consciousness and reality,” she said on the show, revealing she was a huge fan of the original trilogy.

“So when I got the call from my agent, I remember I was in India filming something, and they were like, ‘Oh, [director] Lana [Wachowski] wants to meet you tomorrow in San Francisco,” she went on. “I drove to the airport. I was like, ‘Sure!’ Whatever it takes to get the opportunity to work with all of you lot, it’s just such a privilege and an honor.”