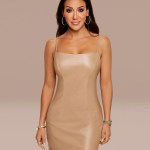 Season 12 of ‘The Real Housewives of New Jersey’ is fast approaching and Margaret Josephs is ready to reveal all the juicy details!

Season 12 of The Real Housewives of New Jersey is arriving soon and Margaret Josephs, or “Marge,” 54, is spilling some tea with HollywoodLife, revealing in an EXCLUSIVE interview how heated this next season will be! According to the Caviar Dreams, Tuna Fish Budget author, the drama of course involves the dalliances of her co-stars — Teresa Giudice, Dolores Catania, Jackie Goldschneider, Melissa Gorga, Jennifer Aydin — but Marge herself is often the center of it all.
Speaking with Margaret — and her hubby Joe Benigno — HL got the low down about the new season as well as some other details about Margaret’s life — like, for example, the status of she and Joe’s home renovation, which has been heavily documented on the show.
HOLLYWOODLIFE: Give me the scoop! Dolores said this season is heated.
JOE BENIGNO: That is the understatement of the century.
MARGARET JOSEPHS: And of course, I’m in the middle of all that, you know.
HOLLYWOODLIFE: Are ponies flying?
MARGARET: No ponies flying! No hair pulls … but other things are flying!
HOLLYWOODLIFE: Big news this week with Teresa’s engagement! What are your thoughts?
MARGARET: You know what, if Teresa is happy, I’m happy, I sent her well wishes, I texted her right away. And you know what? She’s thrilled and I’m happy for her.
HOLLYWOODLIFE: Do you feel like it’s going to change the dynamic on the show at all, with her wedding planning and things like that?
MARGARET: Yeah, I think it lends to some fun! I don’t see her being a bridezilla, because she’s excited. I mean they wanted to get engaged, they want to get married. We’re both looking forward to it!
HOLLYWOODLIFE: So what is new with you both?
MARGARET: Joe is working on the second floor of the house now! He had to move to the second floor of the house to start work on that! It’s the never ending process. We’re just living life, I have my business, everything is good, thank God.

A premiere date for Season 12 of The Real Housewives of New Jersey has not yet been released by Bravo, although the show has typically premiered in the late winter or early spring.