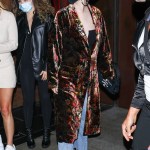 Selena Gomez stepped out in a ’70s inspired look in Hollywood! Her skin was glowing as she showed off a neutral smokey eye.

Selena Gomez, 29, stepped out in a stylish ensemble for a Saturday night out at TAO in Hollywood. The Rare Beauty founder channeled the 1970s in a floral velvet duster jacket, which featured a single button closure on Oct. 9. She paired the sumptuous jacket over a straight leg cut jean and black leather booties, with a low cut black bodysuit underneath. The “Lose You To Love Me” singer appeared to be joined by friends for the weekend evening out.

The Texas beauty kept her dark hair back in a low hanging bun, showing off her chunky, vintage looking hoop earrings. She could also be seen carrying a plush black Prada logo bag from the company’s ultra popular re-edition collection inspired by the early ’00s. Although she covered part of her face with a protective black mask, her glowing skin could be seen peaking underneath — likely thanks to Rare Beauty’s cult-like liquid highlighter — along with her gorgeous brown smokey eye.

Outside of her latest project, Only Murders In The Building, Selena has seemingly kept a low profile in recent months. The Disney alum did, however, go viral earlier this week after rumors began swirling that she was dating Chris Evans, 40. Eagle eyed fans noticed that Selena joined the very small list of people the actor follows (162, to be exact). It turns out, per fans, the duo were also seen leaving the same studio on Oct. 1 in Los Angeles, CA followed by the same restaurant (of note, they were not photographed together). 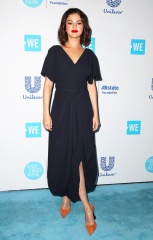 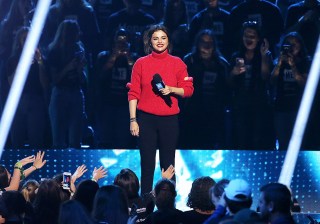 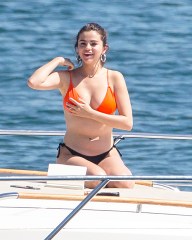 Notably, Sel has admitted to having a crush on the Captain America actor in the past. She confessed she thought Chris was “cute” during an appearance on Watch What Happens Live back in Oct. 2015, confirming he was her “number one” celeb crush. “I kind of have a crush on Chris Evans. Isn’t he cute? He’s very cute,” she confessed, explaining it was the “first time” she had said that publicly. “Oh man, he’s either going to hate me or love me,” she added.