Kim Kardashian, 40, bundled up in a bright pink coat while making her way to 30 Rockefeller Plaza for her first time hosting Saturday Night Live. She was joined by estranged husband Kanye West, who walked behind her in an all black ensemble. The Keeping Up With the Kardashians star opted for a floor-length plush coat as she left her hotel, which she paired with sparkling silver booties and a matching silver purse. 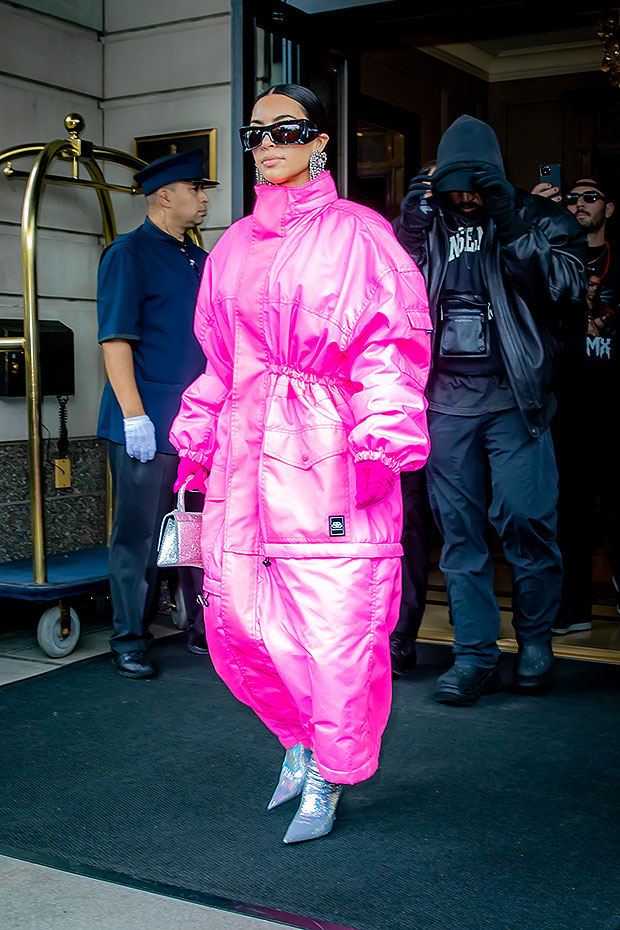 The mom-of-four also wore hot pink gloves, silver drop earrings, and black sunglasses as she swept her brunette tresses back into a bun.  Kim has kept fans updated throughout the week, and documented her  20-hour work day in the lead up to her major gig on the NBC late night show. She shared just a few sneak peeks at 30 Rock with former assistant Stephanie Shepherd, and praised the SNL cast for regularly putting in such long hours.

Kim’s Barbie pink outfit came just two days after she stepped out in an equally bright ensemble. The SKIMS mogul was seen exiting her hotel  in New York City on October 7, rocking a neon pink crushed velvet blazer with matching satin pants and boots. She topped her look off with matching gloves and pointed-toe booties, as she accessorized with chunky silver hoop earrings, black sunglasses, and a sparkly silver purse.

Kim is slated to make history as the first-ever reality star to host SNL and HollywoodLife recently learned that no jokes are off the table! “Kim is very nervous about doing SNL because she wants to really knock it out of the park. She wants to prove to herself and any haters that it was worth it for her to be asked to do the show,” a source told HL.

“One thing she has done and to put the cast at ease is that she has told them that any idea is a good idea, and they can absolutely present her anything and she is willing to make fun of herself and she has mentioned that nothing is off-limits,” the insider dished, adding, “She wants the best idea to win, and she wants to really make it a fun show. If they want to make fun of her family and have some family members on the show, she is all for it.”