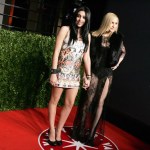 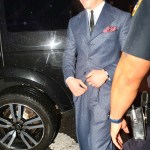 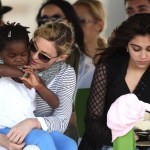 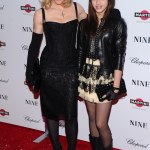 When Madonna hit the red carpet for the NYC premiere of her new concert film, her son was there to support her, and Rocco Ritchie was the spitting image of his famous father, Guy Ritchie.

Rocco Ritchie was on hand Thursday (Sept. 23) to support his mother, Madonna, at the New York City premiere of Madame X. Rocco, 21, arrived in a dapper blue suit with brown shoes, black tie, and white shirt. He also came bearing a strong family resemblance to his father – and Madonna’s ex-husband – Guy Ritchie. Rocco looked like a younger version of the Snatch director at the concert movie premiere and made sure to give some love and support to his mum before heading into the Paradise Club & Theater at the Edition Hotel in Times Square.

Rocco wasn’t the only one there to support Madonna, 63. Her adopted son, David Banda, 16, was also on-hand. He also sported a blue suit but opted to go without a shirt. Instead, he buttoned his vest/waistcoat over a bare chest. Madonna’s boyfriend, 27-year-old Ahlamalik Williams, also attended the premiere, wearing a black and yellow ensemble. Madonna herself turned heads with a bustier top, fishnet stockings, white skirt, mesh gloves, and a jeweled tiara bearing the words “F-ck You.”

Madonna recently celebrated her 63rd birthday and did so with all six of her children. For her “6th century eXtravaganza,” Madonna posed with Rocco, David, her daughters Lourdes Leon, 24, Mercy, 15, and twins Estere and Stella (who turned 9 in August.) In the Aug. 17 posts on her IG account, Madonna shared photos of all her children wearing different outfits, with Madonna’s look the most extravagant of them all. She wore an elaborate headpiece covered with jewels, and equally sparkly necklace, and a low-cut top. “Under the spell of the Byzantine Empire. …………” she captioned the post. Madonna also posted photos of her alongside Ahlamalik while in Italy. “Let the Birthday Games Begin…………”

On Thursday, Elle debuted its October 2021 issue, featuring Billie Eilish on the cover and a quote from Madge in the feature. Madonna didn’t take kindly to the blowback Billie, 19, got for posing in lingerie. “Billie started out in a non-sexualized category, not pandering to the masses and not using her sexuality in any way, which is her choice, and God bless her for that—after all, she’s been a teenager all this time,” said the “Like A Virgin” singer. “[But] if she wants to turn around and take photographs where she is portrayed as a feminine woman, showing her body in a way that she hasn’t in the past, then why should she be punished for it?”