As Fat Joe took on Ja Rule for a Verzuz at Madison Square Garden’s Hulu Theater, Jermaine Dupri felt like getting in the ring. “Somebody let [Diddy] know I’m [at MSG] right now!” tweeted Jermaine, 48, along with a picture of him outside the historic NYC venue. “And he [is going to] need some training for me.” Diddy — who is still going by his “LOVE” moniker – quickly shot down the notion of him going head-to-head, hit-for-hit with Dupri. “Beloved to you, my n—-,” tweeted Diddy, 51, “but your arms too short to box with God!!!” 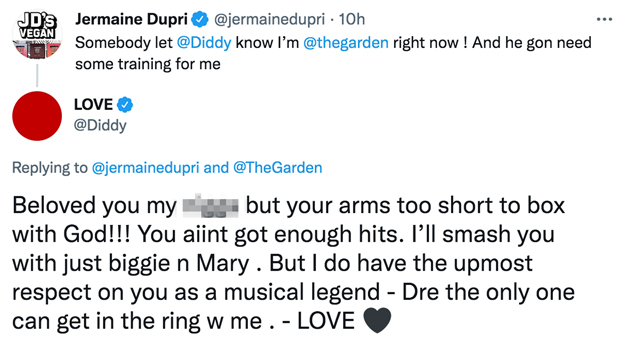 Diddy told Durpi that he didn’t have “enough hits” and that he’d “smash” Jermaine with the records he has with Biggie Smalls and Mary J. Blige. “But, I do have the utmost respect on you as a musical legend.” Diddy ended his message by suggesting who he would take on in a Verzuz (while also rekindling the legendary East Cost-West Coast rivalry.) “[Dr. Dre] the only one [that] can get in the ring with me.” The response from Diddy was met with some confusion from fans, especially those familiar with Jermaine’s production discography.

“Why Diddy acting like Jermaine Dupri doesn’t have Bow Wow, Usher, Mariah Carey, Jagged Edge, Xscape, Da Brat under his belt,” tweeted one fan. “He did songs with TLC, Jay-Z, Alicia Keys, Janet Jackson, etc. it won’t be a clean sweep battle.” “Hold on now… cause the hits [Jermaine] created with [Mariah Carey] could when 10 rounds ALONE,” added another. “You told a man in the Songwriters Hall of Fame he ain’t got enough hits for you,” tweeted a third, noting how Jermaine was inducted in 2018. “mannn somebody get Swizz [Beatz] on the phone and set this up.”

Swizz, 43, actually revealed in March that Dr. Dre was set to take part in a Verzuz, but backed out after witnessing the platform’s early technical issues. The Beats creator wasn’t going to risk being associated with shoddy sound quality and bailed. “When Dr. Dre wasn’t feeling the sound from Teddy Riley and Babyface, that hurt our heart. Oh my God,” Swizz said during an interview with the Breakfast Club, per Complex. “He was supposed to come at the end and announce that he was gon’ do VERZUZ that night… He got on the phone. He was like, ‘Man, I can’t be a part of nothing that sounds like that. My legacy is quality.’ I was like, ‘Oh, we just lost Dre’… that one felt pretty crazy.”