Amelia Hamlin shared a brief message that appeared to reference the beef between her boyfriend Scott Disick and Younes Bendjima, which all has to do with their mutual ex, Kourtney Kardashian.

Amelia Hamlin, 20, may have just thrown a little bit of shade in Younes Bendjima‘s direction. As fans know, or in some cases, are about to know, Amelia’s boyfriend, Scott Disick, 38, is currently involved in some drama with Younes, 28, after the Algerian model shared an alleged screenshot of direct messages sent from Scott, in which he shaded their mutual ex Kourtney Kardashian‘s PDA-filled romance with Travis Barker. While Scott has not publicly commented on the alleged messages, fans thought that Amelia was chiming in on the whole ordeal when she shared a brief but familiar message on Instagram on Aug. 31.

“…now back 2 work,” Amelia captioned her post, which featured two modeling shots of the teenager. She also included three fairy emojis and four gray heart emojis in the message. So why do fans think brief message is shade to Younes? Well, the phrase is super similar to what Younes said at the very end of his second Instagram Story that he shared after releasing the alleged messages with Scott on Aug. 30. “Back to work now. 10 km,” Younes wrote after dropping the proverbial bomb on social media.

This actually isn’t the first cryptic message that Amelia shared since the Younes-Scott-Kourtney drama began. On Tuesday, she posed a photo on her Instagram Story that showed a person holding a cardboard sign that read, “Let’s be nicer to each other. We’re all trying our best.” The model didn’t say who her message was intended for, but fans surely thought it was in reference to Younes seemingly exposing Scott’s thoughts on Kourtney, 42, and Travis, 45. 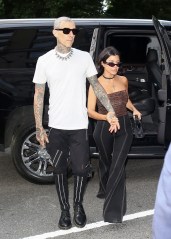 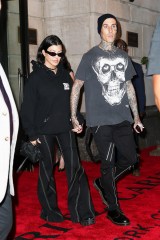 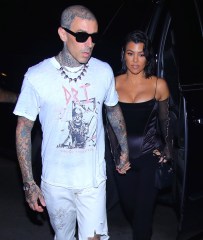 In the messages Younes released, Scott appeared to shading a photo of Kourtney and Travis packing on the PDA in Italy. “Yo is this chick ok!????? Brooo like what is this. In the middle of Italy,” Scott allegedly wrote alongside the photo. Younes replied, “Don’t matter to me as long as she’s happy. PS: i aint your bro.” Then, when he shared the alleged exchange in his own Instagram Story, he wrote, “Keep the same energy you had about me publicly, privately.”

Kourtney and Travis are technically at the center of this drama, but they appear to be completely unbothered while enjoying their PDA-filled trip to Europe. After the messages were released, Travis actually appeared to respond on his Instagram Story when he uploaded a photo of Ray Liotta‘s Goodfellas character laughing. The Blink-182 rocker gave no explanation about what the image was really in reference to, but of course, fans think it’s all related to this wild drama.