Kourtney Kardashian and Travis Barker both took to Instagram to share two new photos of their PDA-filled vacation in Italy and called their time together ‘amore.’

Kourtney Kardashian, 42, and Travis Barker, 45, are proudly showing off their passionate romance with some of their latest social media posts. The Keeping Up with the Kardashians star and Blink 182 drummer didn’t hesitate to do a lot of kissing and hugging in photos that were taken during their romantic Italian getaway on a boat in the water. They both shared pics on Instagram that gave fans a little glimpse of what things were like during their summer vacation.

In Kourtney’s pic, she is sitting on the boat while wearing a black Gucci thong bikini and has her arms around her beau while giving him a kiss. He’s shirtless, showing off his tattoos, and wearing nothing but black shorts as he sits back and kisses the beauty back. “That’s Amore,” the caption for the pic read.

Travis’ pic was a close-up of the lovebirds sharing another kiss on the boat. He was wearing a black hood over his head while she appeared to wear a dark blue top. They also both wore sunglasses and the wind of the water was even blowing Kourtney’s shorter locks around. “Italy,” the caption read along with a black heart.

Before Kourtney and Travis jetted off to Italy, they spent some time in Cabo San Lucas, Mexico on a trip that marked Travis’ first flight since his 2008 private plane crash. He later shared a photo of him picking up and kissing Kourtney while in front of a private jet and captioned it with, “With you anything is possible” along with a black heart. It’s not clear whether or not the trip was planned in advance but shortly before the big move, the musician spoke out about possibly flying again after dealing with the trauma of the crash, which killed most of the people on board, and a source previously told us Kourtney never “pressured” him. 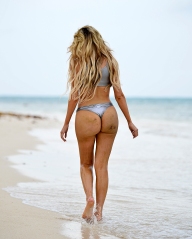 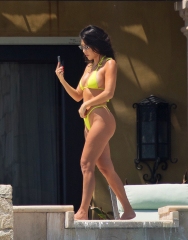 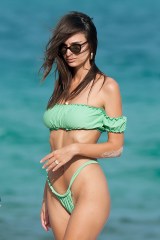 “She never pressured him, but they’ve been talking about it for months,” the source EXCLUSIVELY told HollywoodLife. “This didn’t just happen overnight. He’s been working very hard to get to this day for a long time now. He’s dealt with so much emotional trauma from the accident, and it really was because of Kourtney that he was ready.”