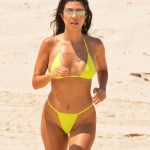 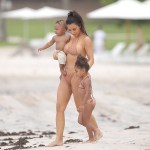 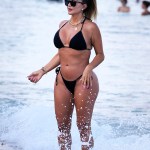 Kourtney Kardashian and her adorable daughter Penelope snapped a cute photo while riding around on a golf cart, seemingly on a family getaway!

Like mother, like daughter. Kourtney Kardashian, 42, and Penelope Disick, 9, looked SO adorable in matching baby blue bucket hats as they snapped a selfie on a golf cart on Saturday, Aug. 7. Kourt’s only daughter, who she affectionately calls “P,” was behind the wheel as she held onto a iPhone, looking so much like her handsome dad Scott Disick, 38. Meanwhile, Kourtney stunned in a neon floral print bikini and sarong as she gave the camera a subtle duck face. The Poosh founder simply captioned the image with a peace sign.

The sweet picture already racked up nearly 1.5 million likes, with Kourt’s fans loving the matching hats! “wow! such cute buckets,” one fan commented on the ’90s accessory, which have made a major comeback in the past year. “Both are perfection,” Kourtney’s younger sister Khloe Kardashian, 37, wrote on the photo.

“The best duo!” and “The cutest ever,” other followers of the Keeping Up With The Kardashian star commented. A pair of little hands and a third blue bucket hat appeared behind Kourt, which likely belonged to her youngest son Reign, 6. The on-trend accessories appeared to be made out of a terry towel material, reminiscent of Juicy Couture tracksuits (which also came in their signature velour) from the 2000s! 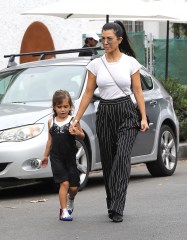 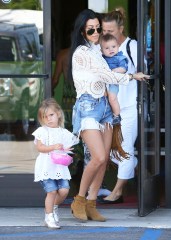 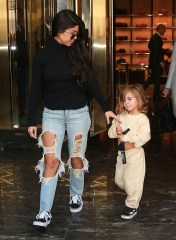 Penelope has had a busy week with her family, as she just planned an epic lemonade stand with her little brother and cousin/BFF North West, 8, and big bro Mason, 11. Khloe documented the whole event via social media, showing off the cousins’ business savvy skills which they definitely learned from their entrepreneurial grandmother Kris Jenner, 65 (the mastermind behind KUWTK and the girls’ successful companies like KKW Beauty, Kylie Cosmetics, Good American and her own cleaning line, Safely).

“What’s your sales pitch? Tell me what you’re doing here,” the Good American founder asked the kids, who giggled and laughed for the cameras. “Lemonade, 3 dollars, and bracelets 10 to 20 dollars,” the reality star read aloud, panning over to colorful bracelets that the girls were also making (and, of course, selling). Penelope looked so grown up as she confidently stood by the stand, showing off her long hair.