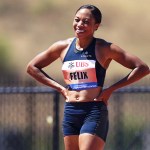 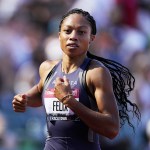 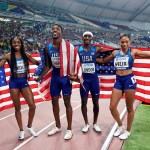 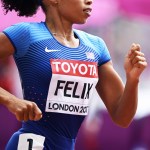 Allyson Felix revealed the last 24 hours have been ‘incredibly humbling’ as she won her 11th Olympic medal and seventh gold in an EXCLUSIVE new interview!

Allyson Felix just solidified her place in Olympics history: the 35-year-old is officially the most decorated woman in track, winning her 11th medal and seventh gold on Saturday, Aug. 7 at the 2020 Summer Olympics. “It’s only been less than 24 hours. At this moment, it feels incredibly humbling,” she said to HollywoodLife EXCLUSIVELY while promoting her What’s Your Legacy campaign with Pantene. “I have such gratitude for everyone who has come before me who has given me so much inspiration and who have paved the way. I know I would not be sitting here with accomplishments that I have without others. It’s a very special feeling and yeah, it’s pretty neat,” she added via video on Aug. 8.

Felix’s massive weekend feat meant she also overtook spring icon Carl Lewis‘ 10 medals over his 17 year career, which spanned from 1979 to 1996. She’s now just one medal away from late Finnish athlete Paavo Nurmi‘s impressive 12 medals. “I really tried not to think about these milestones and just focus on the race,” she added when asked about Lewis’ record. “For me I wanted to be present in the moment and then afterwards, to be able to reflect on whatever else was to come,” she humbly explained less than a day after winning the women’s 400m sprint relay. Along with Sydney McLaughlin, Dalilah Muhammad and Athing Mu, the U.S. team solidified their win, followed by Poland, who earned silver, and Jamaica, who took home bronze.

“My teammates last night that I ran the 4×4 with are all incredible athletes. I am so excited about Athing [Mu] she is truly special. We have already seen that demonstrated, but she has so much more,” Felix said of her teammates. “My teammate and training partner Sydney McLaughlin, who again is in her moment now and [has] so much more to do. I’m inspired by Dalilah as well. There is just so much depth and talent that we have in the sport and I will be their biggest cheerleader.” Prior to the 2020 Games — which were delayed due to COVID-19 — she was an Olympic champion at the 2012 Games in London, also earning silver medals in 2004, 2008, and 2016.

As the Games came to an end on Aug. 8, Felix revealed she’s feeling “at peace,” describing the experience as “really special.” “My last race at the Olympics was really special. To come together with my teammates and to win a gold medal is all I could have ever dreamt of. You know, such a special moment,” she said to HL. “I’ll see what happens next year, if this was my last run at the Games but we have a world championship in the States for the first time. So looking forward to that and all of the other things I want to have time for,” she also said.

The Los Angeles native is also proud to support and be a part of Pantene’s What’s Your Legacy campaign, which allows her to use her voice to “stand up” for others. “I’m so proud of what Pantene is doing and how they’re celebrating legacy with the ‘What’s Your Legacy’ campaign. I love that it not only focuses on legacy and the field of play, for me it’s on the track, but outside of that and for using my voice and for standing up for what I believe is right and for others,” she added. “I think that is what legacy is all about. It’s so important for me when I think about my own life and my own daughter and those special moments that we share. I’m really really excited and proud of this campaign.”