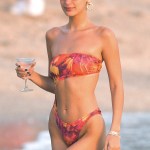 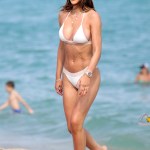 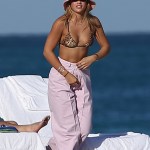 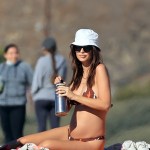 Kendall Jenner took to her Instagram story to share a new mirror selfie that showed her standing in a green bikini while pulling up the bottom strap and wearing a baseball cap.

Kendall Jenner, 25, looks like the picture perfect model of summer in her latest Instagram photo! The Keeping Up with the Kardashians star posed for a selfie while standing in a mirror and wearing an emerald green bikini on Aug. 2. She topped the look off with a trucker style baseball cap that promoted her 818 tequila brand as she flaunted her toned abs while holding up her phone for the snapshot.

The beauty’s hair was down in the epic pic and she posed while pulling up the side strap on her bikini bottoms. Her nails were also painted various colors and she had a gold bracelet on one of her wrists and what looked like a black hair tie on the other.

As the eye-catching photo made its way around Kendall fan pages, users couldn’t help but compliment the runway model’s latest gem. “Look at that body!” one user wrote while another called her the look of “perfection.” A third sweetly said, “I love Kendall” and others left heart-eyed emojis. 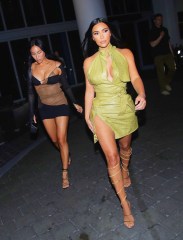 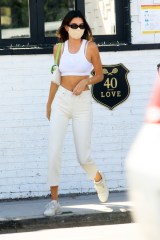 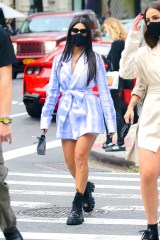 Before Kendall shared her latest ab-baring pic, she got attention for a series of photos she posted on July 10. In them, she was wearing a strapless patterned tube top style top and matching fitted pants as she posed with a fierce look for the camera. She was getting ready to head out to the hot spot Delilah for the evening and added flattering makeup that included mascara and glossy lipstick.

When Kendall’s not turning heads with her fashionable looks, she’s taking in romantic moments with her boyfriend Devin Booker, 24. The lovebirds have been dating since June 2020 but didn’t go public with their relationship until Kendall shared a cozy pic of the two of them in Feb. Ever since then, they’ve seemed pretty inseparable and are often spotted on PDA-filled outings. She also often attends his basketball games with the Phoenix Suns and cheers him on from the sidelines.