Jennifer Lopez was all-smiles as she appeared to be thanking the massive yacht crew as her whirlwind trip with Ben Affleck seemingly came to an end on Saturday, July 31.

Jennifer Lopez, 52, was seen waving goodbye to her yacht crew in Europe. The superstar stunned in a sporty blue patterned outfit with red details by Valentino as she was seen hugging several members of the staff on Saturday, July 31 where the $130 million ship disembarked in Saint-Tropez. The massive 85-metre yacht can host up to 17 guests in it’s nine cabins, and requires a staff of 27 to run.

Jen’s skin was absolutely radiant as she smiled and chatted with the group, keeping her hair back in a chic but slightly messy ponytail. The style maven completed the matching outfit with a white Hermès birkin and her go-to wire sunglasses, along with a pair of high heeled white sandals on her feet. At one point, she was seen strolling down the ship’s jetty as she made her way to into a black Mercedes-Benz vehicle presumably en route to the airport. Beau Ben Affleck, 48, who has been traveling with her, was not seen on what appeared to be the final day of the trip.

Ben and Jen set out on the trip over a week ago in celebration of her 52nd birthday. Jennifer, who was looking better than ever in a Valentino bikini, also used the opportunity to Instagram official with Ben: in a multiple photo post with her bikini look, she included a super sexy PDA pic of Ben! The two looked so in love as they exchanged a passionate kiss aboard the ship, where they weren’t shy about being photographed almost daily. 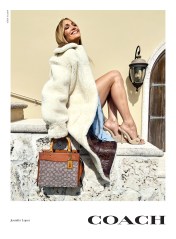 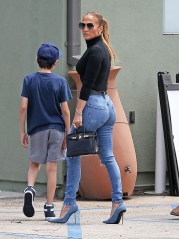 Over the lengthy vacation, the rekindled couple made stops in Monte Carlo, Portofino, and Naples, just to name a few. The pair were also seen having a blast at her ritzy birthday bash in the south of France where they jammed to some of her most iconic tunes, including 2002’s “Jenny From The Block.” The single, which is almost 19 years old, is a special one for Ben and Jen as the Oscar winner co-starred alongside the New York native in the unforgettable music video. At several points on the trip, fans were convinced Bennifer (the couple’s nickname from the early ’00s) were attempting to re-create several scenes from the video — including one where he affectionately touches her derriére on a boat.