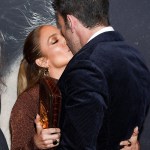 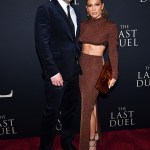 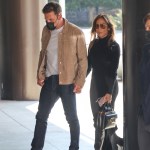 PDA alert! For the first time since rekindling their romance in April, Ben Affleck and Jennifer Lopez were spotted full-on making out in a new paparazzi video — and her kids were there, too!

Bennifer is the real deal, guys! Jennifer Lopez and Ben Affleck went to dinner at Nobu in Malibu on June 13, and there was no shortage of PDA during their meal. Paparazzi cameras caught Jen and Ben at the dinner table, and they couldn’t keep their hands — or their lips — off each other. In a video from the meal, WHICH YOU CAN SEE HERE, Jen can be seen rubbing Ben’s face before leaning in for a kiss. He then nuzzles her neck and whispers something in her ear as she giggles uncontrollably.

At one point, Jen’s 13-year-old son, Max, approaches the pair to show them something on his phone. Despite the interruption, Jen and Ben did not seem shy about the PDA, even in front of the teenager. Max already seems to be comfortable with Ben around, going out of his way to show him the actor whatever is on the screen. At the very end, Jennifer’s daughter, Emme, also joins the group. The lovebirds were at Nobu to celebrate Jennifer’s sister’s birthday, according to Page Six.

An eyewitness further told HollywoodLife EXCLUSIVELY, “Everyone was extremely comfortable with each other and Ben was giving a lot of his attention to Jen’s kids. There was no awkwardness with the PDA they displayed and everyone was just having a really good time. They seemed to be in a very great mood with each other.”

This major showing of PDA comes just weeks after Jen and Ben got back together in at the end of April. Their reconciliation followed Jennifer’s split from Alex Rodriguez, who she was engaged to for two years before they ended things earlier that month. Fans were thrilled to see Jen and Ben back together, as longtime fans of the couple were still reeling from their decision to call off their wedding in 2003, which ultimately led to their Jan. 2004 split. Bennifer was one of the hottest celeb couples of the early 2000s, and now they’re definitely heating things up again!

Since getting back together, Jennifer and Ben have taken a trip to Montana, while also spending time at one another’s homes in Miami and Los Angeles. Ben clearly already has the seal of approval from Jen’s family, too. Not only did he join the group for this birthday dinner, but Jen’s mom, Guadalupe, was seen spending time with the actor in Las Vegas earlier this month. The love is real!