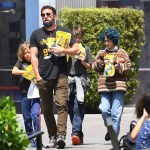 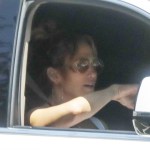 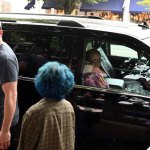 Jennifer Lopez and Ben Affleck shared an intimate moment in the actor’s Mercedes-Benz as they checked out a reported $65 million home.

Ben Affleck, 48, and Jennifer Lopez, 51, were spotted showing some PDA in Los Angeles! The couple shared an intimate kiss while checking out some mansions for sale in the Holmby Hills neighborhood on Thursday, July 15 in video and photos obtained by TMZ. Ben drove his Mercedes-Benz behind a realtor, who was in a Range Rover, as they viewed various homes — including a 31,000 sq. foot one that’s worth a whopping $65 million. Jen wore a cream sweater and her large diamond stud earrings, which appeared to be about two carats (and the same ones she wore out to Avra).

A few days prior, Bennifer shared another sweet moment while driving! Ben took his eyes off the road to gaze at his gorgeous rekindled flame on Tuesday, July 13. The on-again couple were stuck in a Los Angeles traffic jam as Ben drove down the iconic Sunset Boulevard, keeping the windows of his black SUV rolled down for some fresh air. Perhaps out of frustration, J.Lo appeared to let out a sigh as Ben stopped to soap in her beauty.

The Oscar winner was casual in a black t-shirt, while Jennifer stayed cool in a white tank top. The “Dear Ben” singer kept her hair up in a bun, allowing her curtain-style bangs to gently frame her face. She finished her look with a pair of wire sunglasses and gold hoop earrings. It’s unclear where the pair were headed, but the traffic didn’t seem to be bothering Ben in the least.

Jennifer Lopez Through The Years: See Her Transformation 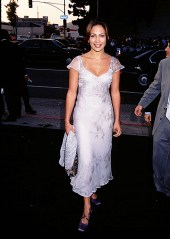 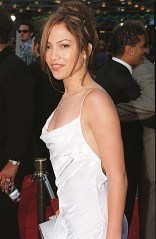 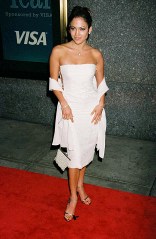 The couple have been inseparable in recent weeks, hanging out with their kids around Los Angeles and near Jen’s estate in the Hamptons! Ben’s son Samuel, 9, joined Jen’s twins Max and Emme, 13, for an action-packed day at Universal Studios two weeks ago. Just days later, the kids were spotted at a blended family hangout with Ben and J.Lo at the Brentwood Country Mart — an outdoor shopping mall that The Town actor is regularly spotted at with his kids.

While Jennifer hasn’t outright talked about her rekindled romance with Ben — whom she was engaged to from 2002 – 2004 before calling off the nuptials and splitting — she has hinted at it in several recent interviews. “I’m always trying to grow and evolve and become more fully myself and true to myself,” she Maid In Manhattan star said while talking with Ebro Darden on Apple Music 1 on Monday, July 12 about “Cambia el Paso,” her new Spanish language song.  “And once I realized that, things happen. Things happen that you don’t expect to ever happen. I mean, once you get good, once you get to the point where you’re like, ‘This is not right for me, or this doesn’t feel good, or I need to make an adjustment here. This is not really about anybody else but me,” she went on.

“Once you do that, stuff starts falling into place. And I think that’s how you should process this moment that I feel again. And then it always shows up in the music,” she added, subtly hinting at her split from Alex Rodriguez, 45. “Sometimes you have to change direction, even though that might be painful or it might seem weird to other people. It’s really just about who you are and what feels right to you, and that’s what it’s about.”