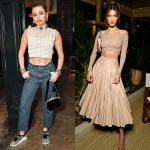 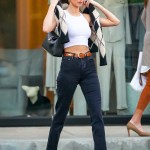 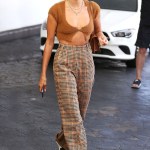 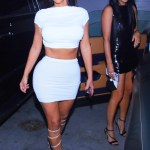 Kendall Jenner looked stunning in a plain crop top, while Caitlyn found time away from the campaign trail to get dinner with her daughter.

Kendall Jenner, 25, looked fabulous when she grabbed dinner with her dad Caitlyn Jenner, 71, at Lucky’s Steakhouse in Malibu on Sunday evening. Kendall rocked a tight, white crop top that showed off her midriff. She also sported a pair of black jeans, a brown belt and black boots. She also draped a beige and black patterned sweater over her shoulders for the outing. Meanwhile, Caitlyn, who’s running for governor in California as a Republican, wore a long brown sweater and orange capri-pants.

The dinner with her dad came after an eventful weekend in Las Vegas for Kendall. The 818 Tequila founder was stunning in a sexy, strapless, patterned tube top, while she met up with plenty of famous friends at Delilah’s. The Keeping Up With The Kardashians star was joined by Justin Bieber, Hailey Baldwin, and her sister Kourtney Kardashian for the night out. Aside from eventful nights in Vegas, Kendall has been rocking a ton of crop tops lately. She wore a black tight piece under an electric blue jacket for a fitness campaign on July 3, and she tied a shirt into a crop top, while on a trip to Paris at the end of June.

While Kendall has been busy with 818 Tequila, her dad has been relentlessly campaigning in the California gubernatorial race. Caitlyn has brought up her kids plenty of times throughout her campaign. The former Olympian said she asked her children and step-children not to tweet support, because it’s her “deal” in a May 26 interview with Good Morning America.“I said if anybody asks any questions in the media — because obviously they are in the media — I just said, say ‘no comment,’ address your comment to me,” she explained. 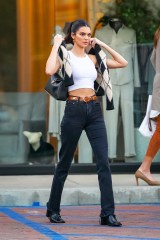 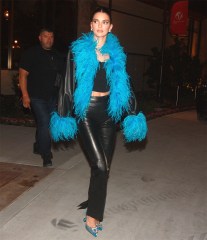 Caitlyn has also said she felt that her family doesn’t need additional media scrutiny, regarding her campaign, in another May 10 interview with CNN. “They were scared, one for my safety and scared of what the media is gonna do,” she explained. “You know, my family has certainly been out in the media and they’ve taken their shots that they don’t need to take anymore.”