Megan Fox responded to a photo showing her ex Brian Austin Green sharing a passionate kiss with his girlfriend Sharna Burgess and some fans are questioning what it means.

Megan Fox, 35, seemed to show support for her ex Brian Austin Green, 47, and his new girlfriend Sharna Burgess, 36, when she wrote a comment on a sweet pic he shared of the two of them, but some followers are wondering if there’s more to it than meets the eye. In the snapshot, which was posted on July 6, the actor and the ballroom dancer are kissing while spending time at Walt Disney World Animal Kingdom. “It’s been a really long time since I’ve been with someone I can truly share life with. ❤️,” Brian wrote in the caption of the pic.

Sharna didn’t hesitate to respond with, “There’s no one else I could ever imagine sharing it with. I love you,” along with a red heart emoji. Megan also responded with, “Grateful for Sharna” along with a purple heart emoji before later deleting it, and it was captured by the comments by celebs Instagram account. Once the exchange was made public, it didn’t take long for people to start sharing their opinions.

“He tried to throw shade and Megan said, ‘Not today, sir.’,” one follower wrote, referring to both Brian and Megan’s comments. “She deleted it lol😂so i doubt it was sincere,” another wrote while a third shared, “Sounds like she’s happy to have him off her hands 😆.” Update: Sharna replied! 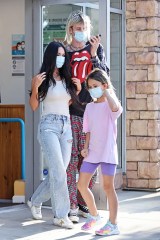 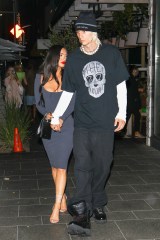 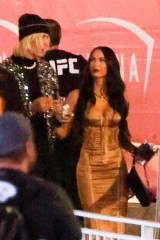 Others pointed out that Megan was kind for sharing the response. “Class,” one person wrote while another said, “love to see this.” A third wrote, “That’s awesome! Really makes me respect Megan Fox” and others added clapping emojis.

Megan’s comment comes in the midst of her own relationship with Machine Gun Kelly, 31. The lovebirds have been dating for over a year and seem just as inseparable as Brian and Sharna in their pics and outings. Megan and Brian ended their marriage last year but still co-parent their three kids, Noah Shannon Green, 8, Bodhi Ransom Green, 7, and Journey River Green, 4. He started dating Sharna in late 2020.