Megan Fox opened up about her first ‘magical’ encounter with Machine Gun Kelly in a new interview.

Megan Fox revealed she had a “magical” connection with Machine Gun Kelly the second she laid eyes on him. In an interview with the Washington Post this week about her longtime film career, the actress, 35, opened up about her first encounter with the rapper, real name Colson Baker, 31, while on set of their 2021 film Midnight in the Switchgrass — and it sounded like the cosmos aligned instantaneously.

Megan and MGK have been linked since early 2020, after meeting on set of their mystery crime film. The actress even starred in the musician’s music video for “Bloody Valentine” in May of last year. At the time, Megan was still married to longtime husband Brian Austin Green, but after photos had surfaced of Megan and MGK, Brian, 47, confirmed that the two actually split at the end of 2019 after 10 years of marriage together. (Megan officially filed for divorce in November 2020.) 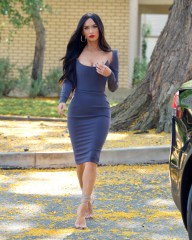 Brian confirmed the split in an episode of his podcast last May, revealing that the two simply drifted apart. “We’ve had an amazing relationship and I will always love her and I know she’ll always love me,” the Beverly Hills, 90210 actor told listeners. “As far as a family, what we’ve built is really cool and it’s really special.” Brian and Megan share children Bodhi, 7, Noah, 8, and Journey, 4, together.

In the podcast, the actor also reiterated that the separation had nothing to do with any infidelities. He even discussed MGK directly. “I’ve never met him, but Megan and I talked about him and they’re friends at this point,” Brian said. “And from what she’s expressed, he’s a really just nice, genuine guy. I trust her judgment. She’s always had really good judgment.”

Last July, Megan and MGK gave their first joint interview as a couple — and the actress called the musician her “twin flame.” She said of the instant connection, “I knew right away that he was what I call a twin flame. Instead of a soul mate,” Megan added, “a twin flame is actually where a soul has ascended into a high enough level that it can be split into two different bodies at the same time. So we’re actually two halves of the same soul.”