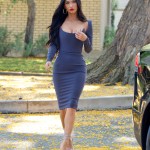 Mere days after Brian Austin Green confirmed that he and Megan Fox had split, she showed up in Machine Gun Kelly’s new ‘Bloody Valentine’ music video to dance around in her underwear.

While Machine Gun Kelly‘s new music video didn’t confirm he and Megan Fox are dating, it did offer a new twist in this whole crazy affair. MGK (born Richard Colson Baker, 34) released the visual for his song “Bloody Valentine” on May 20, barely 48 hours after her husband Brian Austin Green, 46, confirmed that he and Megan, 34, had split. At the start of the video,  Megan wakes up alongside MGK in his bed, before their on-screen romance turns tragic – and fatal. Megan tapes MGK’s mouth shut and proceeds to torture him – albeit in a sexy way. They come this close to kissing before the video ends in a fatal explosion of pink electricity.

So, the question is – does this confirm that Megan and MGK are an item? Or does it confirm that they’re “just friends” who happened to be working on a couple creative projects together? Talk of a possible romance started on May 16 after MGK and Megan were spotted getting food and coffee together (days after Megan was seen without her wedding ring.) Shortly after that, Brian posted a cryptic message about how “eventually butterflies get bored sitting on a flower for too long.” As fans speculated the status of Megan and Brian’s marriage, he put all that talk to rest on his podcast, …With Brian Austin Green. After 10 years of marriage and three kids together – Journey River, 3, Bodhi Ransom, 6, and Noah Shannon, 7 – he confirmed that they were calling it quits.

Brian, during the podcast, said that Megan and Kelly were “just friends,” and they had met while on the set of the upcoming movie, Midnight in the Switchgrass. “I don’t want people to think that [they] are villains or I was a victim in any way with any of this — because I wasn’t. This isn’t something new for us. This is something new for people to experience and hear about in the press … but it’s not new for us.”

Machine Gun Kelly “really likes her as ‘more than friends,’ and he would like to date her,” a source close to Kelly told HollywoodLife EXCLUSIVELY about their rumored relationship, “but he is being respectable and not taking advantage of her emotions.” The source didn’t confirm that these two were are together but said that they’re enjoying what they have at the oment. “They just find each other to be a breath of fresh air.”