Dr. Jill Biden engaged in a little PDA with husband Joe Biden while gracing the cover of the August 2021 issue of Vogue. The 70-year-old educator and first lady partook in several photos for the story, one of which featured her and Joe, 78, sharing a sweet intimate moment together on the grounds of the White House. Jill was dressed in a stunning green dress, while the 46th U.S. president stuck to his usual wardrobe with a fancy black suit and tie. Joe and Jill have been married since 1977 and have one child together: daughter Ashley Biden, 40. 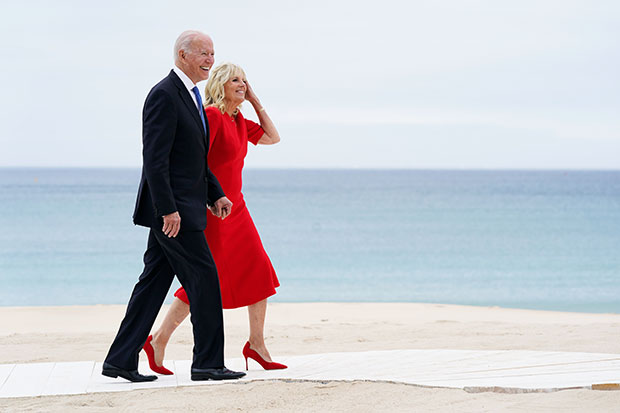 Jill spoke extensively about the “magical quality” of living in the White House with her family in the Vogue interview. “One room is just more beautiful than the next, and you’re sort of in awe,” she told the publication. “Everyone here works so hard to create this world because I think that they understand the kind of pressure that Joe and I are under. They make the rooms beautiful, and the flowers and the food are perfect.” Jill also said there is a lot she wants to accomplish as first lady. “Now I have a bigger platform and I feel every day, like….What could I give up? That I would want to give up? Nothing,” she said.

Joe was also interviewed by Vogue and admitted that winning the presidency has impacted their marriage. “I miss her. I’m really proud of her. But it’s not like we can just go off like we used to,” the president said. He elaborated: “When we were living in Delaware and married, once a month we’d just go up to a local bed-and-breakfast by ourselves, to make sure we had a romantic time to just get away and hang out with each other.” Despite their hectic schedules, the lovebirds are determined to still put each other first. “We have to figure out a way — and I mean this sincerely — to be able to steal time for one another. I think that’s the deal,” Joe told Vogue.

Jill’s inclusion in Vogue is typically common for first ladies during their husband’s presidential tenures. However, Melania Trump was not featured on the magazine while husband Donald Trump was president. Before that, Michelle Obama appeared on the cover a record three times as first lady in 2009, 2012 and 2016.