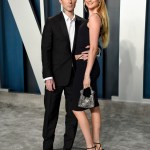 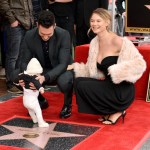 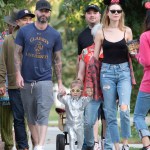 Even on vacation, Adam Levine is putting in the work! During his tropical trip to Hawaii with his wife, Behati Prinsloo, he squeezed in a workout on June 8.

Adam Levine works hard to keep up his muscular physique! So, it comes as no surprise that he made sure to get an intense workout in on his vacation. Adam is currently in Hawaii with his gorgeous wife, Behati Prinsloo, and their two kids, but he took a break from soaking up the sun for a sweat session. With help from a trainer, Adam got his fitness on.

The Maroon 5 singer took to his Instagram Story to share a video from the workout. In the clip, he’s down on one knee, throwing a heavy workout ball back and forth with his trainer. With the sun beating down, Adam is shirtless while doing the exercise, as well. His trainer, Austin Pohlen, also posted a photo of Adam concentrating hard while lifting weights. “These are harder than they look,” Adam admitted, alongside a video with the weight.

Luckily, the trip hasn’t all been work and no play! Earlier this week, Adam and Behati were photographed taking a dip in the ocean, and they looked like they were having a blast. Adam and Behati goofed around in the water in their swimsuits. At one point, he lifted her up in the air, and she couldn’t stop laughing.

Although they looked like newlyweds, Adam and Behati are actually coming up on their seventh wedding anniversary. The singer and model started dating in 2012, and after a brief breakup, they got married in July 2014. The pair’s first daughter, Dusty Rose, was born in Sept. 2016, followed by another daughter, Gio Grace, in Feb. 2018. Adam and Behati are very private when it comes to their family life, and do not often share photos of their little ones on social media.

This family trip to Hawaii comes following Adam’s return to The Voice in May for the first time in two years. He and his band, Maroon 5, performed on the show’s season 20 finale. Adam unexpectedly left the The Voice in 2019, despite signing on to do another season at the time, but clearly, any bad blood that he may have had with the network is a thing of the past now!