Christina Milian is a proud mom-of-three! The singer shared a snap of herself breastfeeding her newborn son Kenna during a recent photoshoot, and she was positively glowing! Just two weeks after welcoming her little bundle of joy with partner Matt Pokora, Christina took to Instagram to share a pic from photoshoot with clothing brand PrettyLittleThing. The 39-year-old stunned in a black satin nightwear set, while cradling her baby boy in her right arm.

She flashed the camera a subtle smile, and pushed her raven tresses behind her shoulders as she modeled the nightwear like a pro — talk about a multi tasker! Christina was seen sitting on a sofa in what appeared to be a playroom for the shoot, and propped one leg up to conceal her baby boy’s face. “Sometime the smallest things take up the most space in your [heart] .. and HOUSE!” she captioned the May 5 photo. “This is everything,” one fan commented, while thousands of others dropped heart emojis.

Of course, fans of the singer would know she announced the arrival of her son on April 24 when she shared a sweet snap of herself cuddling the newborn. “Kenna, Welcome to the world baby boy! Wow, What an adventure we’ve been on since the day he was conceived!” the “Dip It Low” singer wrote in her caption. “I thank God everyday for blessing me with his super active energy (wonder where he gets it from? ) and now to meet our healthy baby boy?! Thankful. Blessed.” 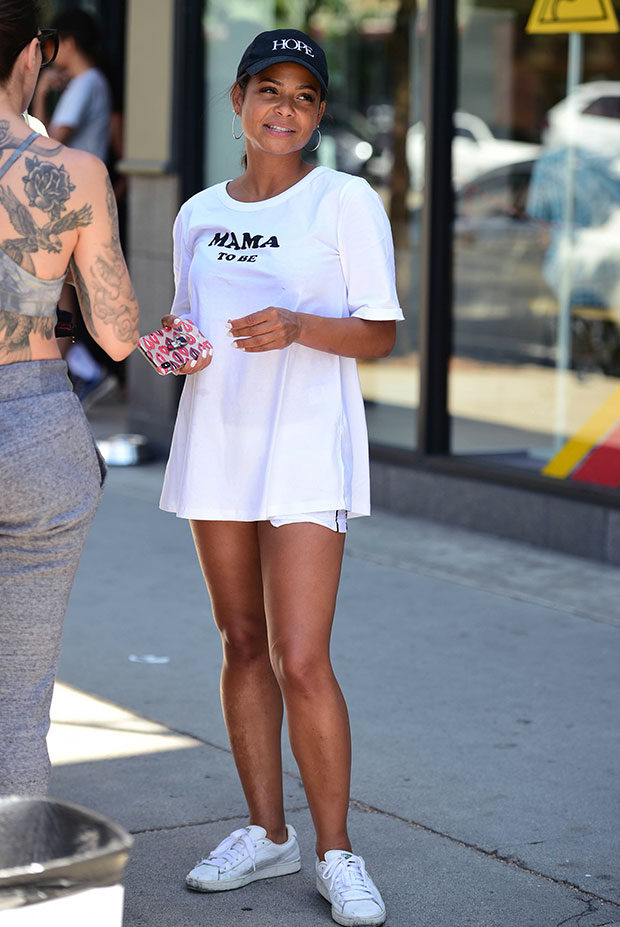 Kenna make’s Christina’s brood a family of five, and his arrival comes less than two years after the proud parents welcomed a son, Isaiah Pokora. Matt first announced they were expecting a third bub just 10 months after Christina gave birth to little Isaiah. His December 10 Instagram post included an adorable photo of their little one touching Christina’s growing baby bump as he sat in his high chair. “You and me + 3. Isaiah is already a protective big brother #partyoffive,” he wrote as the caption, translated from French.

Throughout her pregnancy, Christina gave fans plenty of glimpses at her growing baby bump, and even rocked a lacy lingerie set from Rihanna‘s Savage X Fenty line. The actress exposed her bare baby bump in the February 3 pic, in which she wore a purple bra, matching bottoms, and a delicate gold necklace. “Love Struck,” she captioned the photo, noting that she was an ambassador for the brand, founded by musician slash fashion icon Rihanna. We’re obsessed!