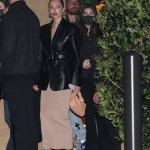 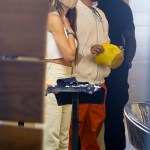 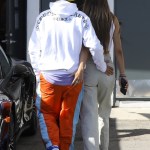 Lisa Rinna thinks Scott Disick’s too ‘old’ to be hanging out with her 19-year-old daughter, Amelia Hamlin. But the model didn’t appear to have a care in this photo.

Amelia Hamlin didn’t appear bothered after the world learned about Lisa Rinna‘s true feelings about her daughter hanging out with a man 18 years older than her. Lisa’s disapproval over Scott Disick was revealed in the new trailer for The Real Housewives of Beverly Hills that dropped on April 12, and on that very same day, Amelia was pictured walking out of her pilates class in West Hollywood. There was no look of distress on the 19-year-old model’s face, if it did indeed show her reaction to the revelatory trailer.

Instead, Amelia appeared nonchalant — bouyant, even — as she seemingly adjusted her shades while stepping out onto the road. She looked fabulous, too, rocking a sports bra and leggings set from the celebrity-favorite workout wear brand, Set Active, and a pair of Yeezy slide sandals.

Shortly before she was spotted on the outing, fans saw Amelia bring up Scott during a FaceTime call with her mom that was featured in the new RHOBH trailer. “I’m hanging with my friend Scott,” Amelia said on the call, whispering Scott’s name as if she too knew their relationship was controversial. The preview then cut to a clip of Lisa’s co-star, Kyle Richards, yelling, “He’s too damn old!”

Lisa agreed, yelling right back, “I know!” Kyle made it clear that she was referring to Scott, too, by adding, “And he’s got three kids.” It’s a well-known fact that Scott shares his children Mason, 11, Penelope, 8, and Reign, 6, with his ex Kourtney Kardashian.

Kyle and Lisa aren’t the only people to share this same wariness towards Amelia and Scott’s 18-year age difference. Fans often bring it up on social media, but “Scott isn’t bothered by the backlash to their relationship, he really couldn’t care less what people think,” a source close to the reality star EXCLUSIVELY told HollywoodLife at the beginning of March.

Meanwhile, Amelia directly responded to the backlash by saying that “everyone can calm down” in an Instagram post shared in February. She even declared that Scott is her “dream man.”