Cardi B has declared herself a “villain” after posting a clip of herself strutting through her bathroom in a one-piece swimsuit. “THE VILLAIN,” she captioned the April 7 Instagram video, which showed her rocking a brown, high-cut body suit with a large cut out around her midsection. The “WAP” hitmaker began by walking away from the camera, strutting her stuff in a pair of towering, gold heels, before turning around and revealing her gorgeous face.

“The internet is OFFICIALLY BROKEN ! COME BACK TOMORROW WHEN ITS BACK UP AND RUNNING!” one fan wrote in the comments section, while “Juice” singer Lizzo commented, “Sheeeeeeeeesh.” Cardi’s tresses were in straight, sleek style, while she rocked a glam makeup look with a glossy pout. She ran her manicured nails through her hair as she turned to face the camera, flashing a subtle smile. In true Cardi fashion, she was manicured to perfection, and rocked white polish on her toenails.

It comes less than two weeks after she hilariously gave the Real Housewives of New Jersey star Gia Giudice, 20, a shoutout in a funny tweet. The rapper shared lyrics to the reality star’s “Sad Song”, which was featured on the Bravo series way back in 2011 when Gia was a pre-teen. “Thinking about deleting this app until I drop my next little project …but then again where I’m going to hear ‘wakin up in the morning thinkin about so many things I just wish things will get better ‘?,” Cardi tweeted, referencing TikTok, where Gia’s song has gone viral. 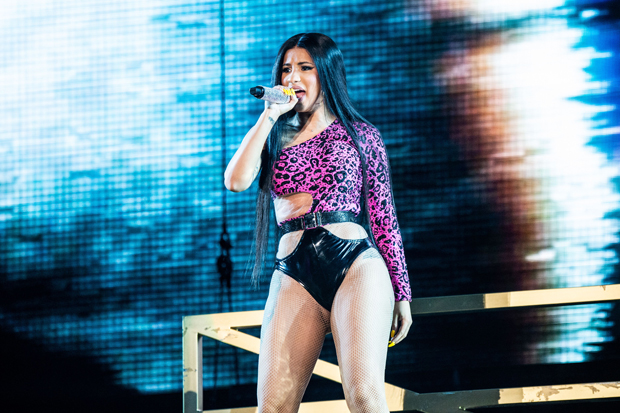 The daughter of Teresa Giudice then replied, “this is unreal!! CARDI I’m in Bahamas let’s meet up.” The internet was so here for the pairing. “Give us “Gia’s Sad Song (the Cardi B Remix)” IMMEDIATELY. I’ll even take a Milania [Giudice] feature/throw in a verse of ‘Can’t Wait to Grow Up’,” one person tweeted in response, while another joked, “Put Gia on a remix of WAP @iamcardib. The people demand it.” We would certainly love to hear that!