Brad Pitt, 57, can add ‘fashion designer’ to his already lengthy resume. The Oscar-winning actor has teamed up with Brioni for a new collab, which features a seven-piece collection of “rugged-yet-refined” menswear. The Italian label has released the line, which includes a charcoal suit, a cashmere sport coat, a long-sleeved polo sweater, and more. Brad rocked long tresses and a goatee in promotional snaps as part of the brand’s campaign, and looked totally smoldering.

He posed on a couch in warm, afternoon sunlight while rocking pieces from the collection, including slacks, a polo, and a suit jacket. He looked out of frame, with a model-esque expression on his face, while his lengthy brunette tresses were parted to the side. “Next to being one of Hollywood’s most impactful stars both in front and behind the camera, Pitt is a style icon, embodying the relaxed elegance of the modern man with a captivating ease and graceful confidence,” Brioni wrote on its website.

It comes amid Brad’s ongoing custody battle with ex-wife Angelina Jolie, 45, over their minor children — Pax, 17, Zahara, 16, Shiloh, 14, and 12-year-old twins Knox and Vivienne. In court documents filed on March 12, Angelina accused Brad of domestic abuse, revealing she has “proof and authority” to support her allegations. 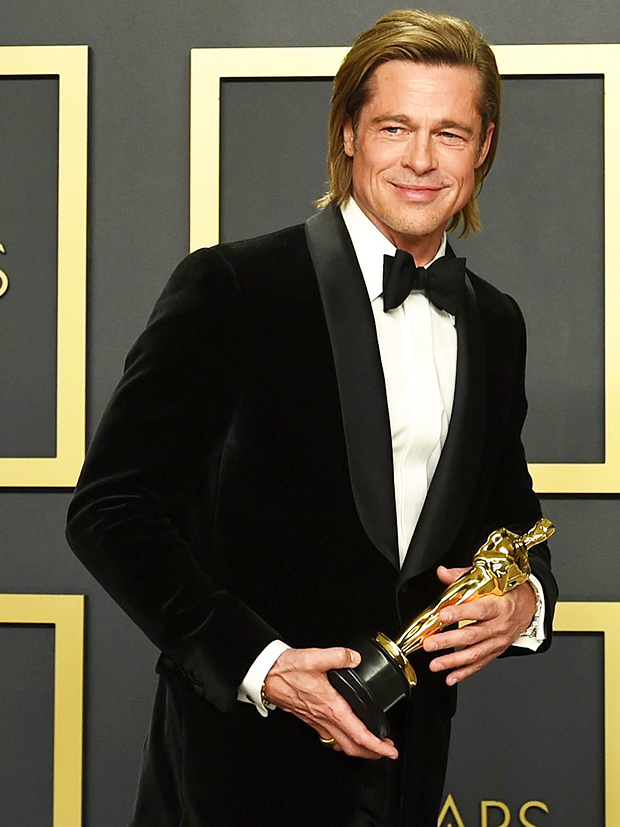 The A-list couple have been embroiled in a divorce battle since their split in September 2016. They were married for just over two years when they called it quits, and figuring out custody of their six children has proved to be a hurdle from the get-go. Brad was also investigated for child abuse involving an incident with the pair’s then-15-year-old son, Maddox Jolie-Pitt on a plane. Brad was cleared by both the Department of Child and Family Services and the FBI, however he was only allowed visits with his kids that were approved by a court-appointed psychologist.