Demi Lovato has stunned in a black, one-piece swimsuit, after the final episode of her ‘Dancing with the Devil’ documentary was released.

Demi Lovato is summer ready! The former Disney Channel star has kicked off swimsuit season with a mirror video of herself rocking a high-cut, one-piece bathing suit. She took to Instagram on April 7 to share the clip of herself posing in the mirror, while wearing the sleek bodysuit, which showed off the tattoos on her ribs. The ink featured five Roman numerals, which correspond to the birth dates of her family members.

A short-haired Demi also rocked delicate, gold cross earrings as she offered the camera s subtle smile. She also attached her new song, “Met Him Last Night,” featuring Ariana Grande, to the IG story. The track is one of the songs off her upcoming album, Dancing With the Devil… The Art of Starting Over, in the wake of her new YouTube docuseries Dancing with the Devil.

The post came just one day after the final episode of the fourth and final installment of docuseries was released. In the episode, the former Camp Rock star discusses her whirlwind romance with actor Max Ehrich, who she quarantined with in spring 2020 before getting engaged on July 22, 2020. Sadly, the relationship ended in heartbreak with the pair splitting up less than two months later. 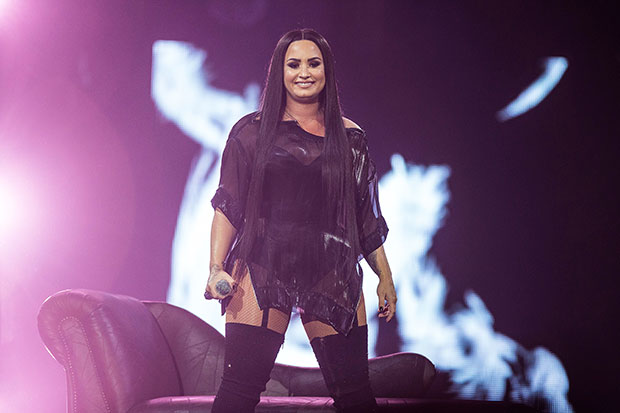 Her segment about Max never mentioned the Young and the Restless star by his name, but fans were able to de-code who she was referencing. “I was like ‘alright, I’m just going to take my time to spend with my family and get to know my boyfriend and cuddle with my dogs more,’” she said while photos of Demi and Max kissing and being affectionate were shown on screen.

She continued, “There have been times in my life when I’ve felt so alone. Now that I’ve found him, I feel amazing.” The clip then cut to Demi filming a confessional in front of a home cam on the night of July 24, 2020, “Hi guys, this is so weird talking to a camera by myself while my boyfriend’s asleep…oh my god, FIANCE” she said, flashing the giant diamond engagement ring from Max. Two nights earlier, he proposed on a beach in Malibu, CA after roughly four months of dating.