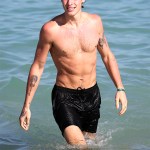 Justin Bieber’s smash new song ‘Peaches’ got some love from his pal, Shawn Mendes, who covered it in a now-viral TikTok video.

Shawn Mendes is loving Justin Bieber’s song “Peaches,” and he proved it by posting a vocals-only version of himself singing the song on TikTok. In the stripped down video, Shawn sang the chorus of “Peaches” a cappella, using just his fingers snapping to keep the beat. In less than one day, it had nearly 1 million likes on the site, along with thousands of comments from fans praising the cover.

Justin and Shawn have similar backgrounds, as they’re both from Canada and started out in the music industry as young teenagers. In 2015, Justin infamously dissed Shawn when he admitted he didn’t know who he was during a radio interview. However, they’ve come a long way since then!

In 2020, Justin was even featured on the song “Monster” from Shawn’s album, Wonder. The guys performed the track together at the American Music Awards in November. These days, Shawn and Justin totally have a bromance and are super supportive of one another’s careers.

Interestingly, Shawn was once romantically linked to Justin’s now-wife, Hailey Baldwin. Shawn and Hailey spent a lot of time together during the beginning of 2018, and sparked dating rumors on a number of occasions. At the beginning of May, they even walked the Met Gala red carpet together. Just weeks later, Justin and Hailey rekindled their romance, though, and wound up getting engaged in July. They tied the knot that September.

Although Shawn and Hailey denied rumors of a relationship at the time, Shawn later confirmed that they had been seeing each other. “I think it was more a zone of limbo,” he admitted in Nov. 2018. Luckily, there were no hard feelings when Justin and Hailey got together. “I get it, you know,” he said. “I texted Hailey ‘Congratulations’ [after the engagement]. I really am happy for them. She’s still one of the coolest f***ing people ever. She’s not just a beautiful person visually, she’s one of the most beautiful hearts I’ve ever met.”