Hilary Duff has wrapped shooting the latest season of Younger in New York City, and the actress high-tailed it back to warm and sunny L.A. with her family for her final days of pregnancy. The first thing the 33-year-old did was ditch her natural blonde locks for a platinum blue color. She had her favorite stylists from West Hollywood’s Nine Zero One salon do the dye job for her, and showed off the makeover in a series of Instagram photos and videos on Feb. 19.

Hilary shared several photos of her new blue hair while wearing a pink sweater. She included a quick shot of her colorists applying the dye job to her hair, as they seemed to have went to Hil’s home to do the process instead of having her go the them. Since Hilary picked blue, she needed to clarify that she wasn’t signaling that she’s expecting a son any day now. In a short video showing off her new makeover, the current mother of two told fans, “I don’t know if I’m having a boy or a girl. I gotta have fun somehow, so….choose blue for awhile.” 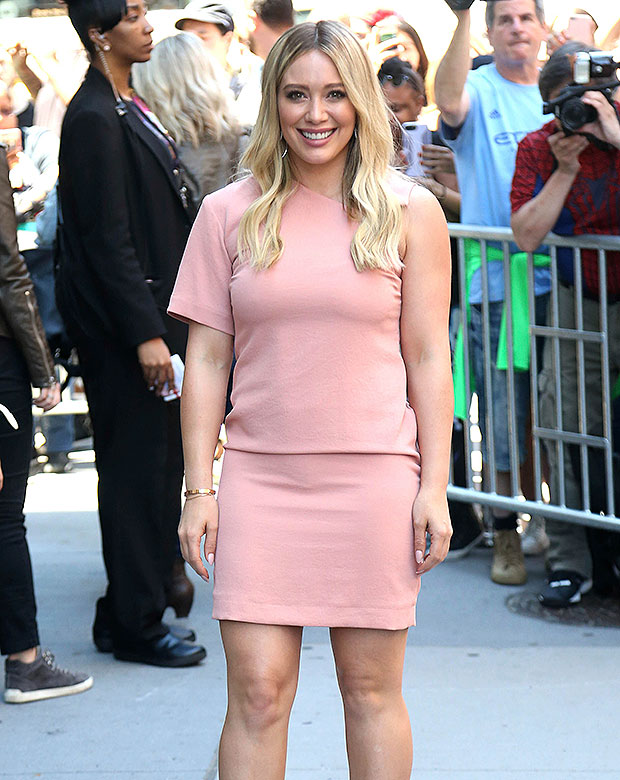 Fans went wild for the look, as it reminded many of when Hilary dyed her hair blue for her “Sparks” music video in 2015.
User @pedritolrp cheered, “OMG! Spark 2.0 era is coming,” with flame emojis while @karenlmccormick declared “Sparks era REVIVED.” Fan @brettalannelson gushed, “Omg sparks hair is back,” as @kl.marti declared, “I love blue Hilary.”

Hilary explained in the caption, “Well…. you guessed it. The minute I got home from New York I needed a change and all I can say is @riawna and @nikkilee901 love me a lot. 1- for saying yes to another crazy change this late in my pregnancy (at least I didn’t cut bangs!) and 2- it took all damn day!”

“Love you guys the most and I swear this doesn’t mean I’m having a boy…my mom thought I was trying to tell everyone something!” the former Lizzie McGuire star continued. She then gave a hint that her baby’s birth is coming soon, though she still doesn’t know the gender. “We still don’t know who’s occupying my apartment – but it’s getting the eviction notice soon-ish,”  Hilary joked.

Hilary’s longtime stylist Riawna Capri cheered on her hair coloring choice, as she adorably shaded some of the actress’ past hair decisions. “At least you didn’t cut bangs OR GO BROWN (again!),” Capri noted in the comments, adding, “love you so so so much and I’m happy to spend the whole day and do it all over again.” She then asked, “like, if you happen to have girl!? do we go pink!??? love you to the moon backkkk!!!.” Hilary is expecting her third child, and second with husband Matthew Koma, 33. They have a two-year-old daughter Banks Violet. Hilary has an eight-year-old son Luca Comrie with ex-husband Mike Comrie.

Earlier in the day, Houston, TX native Hilary was thinking about the devastating winter storm earlier this week that plunged her home-state into sub-freezing temps along with a layer of snow and ice. The state’s power grid was knocked out, leaving millions without electricity, heating sources and unable to boil water so that  itis drinkable. Hilary shared her thoughts next to a photo of the storm’s havoc along an interstate, that also noted how the Baby2Baby charity is working on getting winter coats, diapers, formula and more to families impacted by the storm.

“Truly horrible conditions sweeping many states including my home state…beautiful Texas I’m in disbelief talking to my family who have no power/ no water and running low on food. Not to mention no heat or reprieve from the cold! I wish thoughts and prayers were enough…. but everyone needs more than that right now,” the expectant mom wrote in the caption.

“This past year has hit so many… so hard, I don’t know how or why this can be added to people already struggling or suffering. Breaks my heart. I am honored to work closely with @baby2baby who are on the ground in these states providing essentials and more to the most vulnerable,” she continued. “If you have the means and can donate I am adding a link in my bio to make donating easy. thank you for even reading all of this and possibly spreading the word to someone you know that can help if you are not in a position too at the moment! I will be posting who I am donating to in my stories shortly. Texas, I love you.”