Texas has been covered in a layer of snow and ice for the better part of this week, and millions of residents are in the dark and without heat or power due to the state’s energy grid going down. Citizen have been stranded inside freezing apartments and homes, hunkered down without potable water. One of Texas’ most famous faces, Austin resident and actor Matthew McConaughey, tweeted out his “prayers,” as well as information about how to help his city’s Meals on Wheels program, as so many vehicles couldn’t make deliveries, as well as how to aid the Austin Urban League and the Boys and Girls Club of Austin:

For more information on resources, how you can help or to donate tap the links above 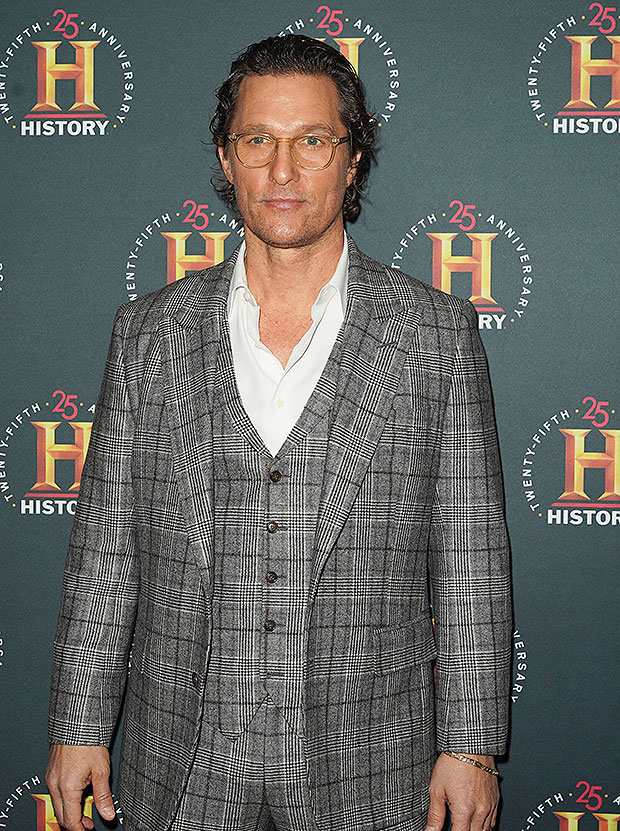 Actor Matthew McConaughey is trying to get the word out about how fellow Austin, Texas residents can help each other get through the winter storm crisis. Photo credit: AP.

Matthew’s wife, former model Camila Alves has also been doing her part to tweet out information and tips to stay warm. She even retweeted details on how residents without power need to choose one room and reinforce it to stay warm, with helpful hints like “Hang thick blankets or large towels in all the windows, roll clothing or towels and block all door and window gaps – Throw all your dirty clothes on the floor, covering every space you can” to keep heat in.

TEXAS…extremely frigid weather and power and water outages everywhere. Please share this information for those that need it!! https://t.co/9erKeqnsV2

Chrissy Teigen used the weight of her powerful social media presence to start a Twitter thread where fans could go to share information or plead for help. One response came from a user <@JCisnerosTX who told Chrissy, “I’m from Laredo, TX—right on the border with Mexico. We’re severely underresourced and it will be another long night tonight. Locals are raising funds to keep Laredo warm and fed. Blankets are v much needed! Pls Venmo @/feed956.” Sadly, there were many similar requests from residents across the freezing state looking for such assistance.

please list some good ways to help Texas here – for me and for all of us:

Chrissy’s thread touched so many people that other celebs joined in to ask what they could do. When a user named
Amanda Kilian replied on Feb. 17, “@chrissyteigen I’ve been without power and water with my 4 year old since 2 am monday my pipes are frozen I’m almost at a breaking point,” Maria Shriver jumped in and asked what she could do for the woman:

How can I help?? @amandiecandy

While Chrissy did her part from Los Angeles, Austin, Texas resident and Grace and Frankie actress Brookyln Decker has been doing everything she can to get the word out about resources to help out those with the aftermath of the storm damage. In a Feb. 17 tweet she wrote, “I’m sharing this thread because if you experience flooding there is a lot of good advice in the comments. Take pictures of everything Call your insurance company ASAP,” along with a TikTok video showing a crying woman giving a tour of her badly flooded house after pipes burst.

I'm sharing this thread because if you experience flooding there is a lot of good advice in the comments.

Take pictures of everything
Call your insurance company ASAP https://t.co/prx1bb1yix

The day prior she shared a tweet that a Texas resident posted showing it was 40 degrees inside of his home. “My INSIDE thermostat at the house. Day 2 of no heat & no water” the tweet read and Brooklyn wrote “Not okay.” The actress has also been tweeting key resource information. On Feb. 18, she shared one post reading “AUSTIN A friend sent me this Google sheet that has resources for: Free essentials. (Limited qtys. Double check these) Open grocery stores with hours (if know) pet stores and restaurants. Warming Centers,” which included a spreadsheet of such useful information for residents.

Bravo’s The Real Housewives of Dallas Star Steph Hollman gave fans an update as she went into her third day without power to her home. She wore a big heavy sweater in an Instagram video and noted that her house was “freezing,” but that they had a fireplace which she was “Super, super grateful for.” Steph reminded fellow Texans to “Check on your friends and neighbors, especially the elderly who may be unable to reach out for help.”

Legendary newsman and Houston, TX native Dan Rather has been tweeting regularly about his home state. “The only thing hot in Texas right now is the outrage and anger. We need answers, accountability, and action. Where are all those politicians who bemoan government, regulations, and preparedness?” he wrote on Feb. 17, in addition to pointing out how absurd the situation is, tweeting, “Apparently America can put a man on the moon but Texas can’t keep the lights on. Houston, we have a problem.”

The only thing hot in Texas right now is the outrage and anger. We need answers, accountability, and action. Where are all those politicians who bemoan government, regulations, and preparedness?

I’ve performed all over Texas. I love that state. And I HATE that this is happening to its residents because of short-sighted greed. The pendulum has got to swing HARD the other way, for everyone’s sake. https://t.co/nUf7PZ4Uwk

Comedian Patton Oswalt noted how the power crisis in Texas is unique due to the state’s business-friendly deregulation practices. He hoped that residents saw how dangerous it is and that it would cause the state to start swinging Democratic blue in upcoming elections. There was widespread furor over their Republican U.S. Sen. Ted Cruz abandoning his Houston home for a warm getaway in Cancun, Mexico, leaving his constituents to fend for themselves in the frigid conditions. Compound that with the state’s Republican Gov. Greg Abbott continually being unable to give a timetable of when the power could be restored in the state, there’s a good chance this terrible weather crisis could have major future political ramifications in turning Texas blue.