Jennifer Aniston‘s rather enjoyable homebody lockdown life has come to an end, as the stunning actress is back as newswoman Alex Levy on Apple+’s drama The Morning Show. The 51-year-old was seen on set on Feb. 9, 2021, wearing a gorgeous dove-grey power suit that featured a long fitted jacket, a high slit in the pencil skirt’s left side and a belted waistline. She wore heels that matched the suit perfectly, along with grey sheer stockings. 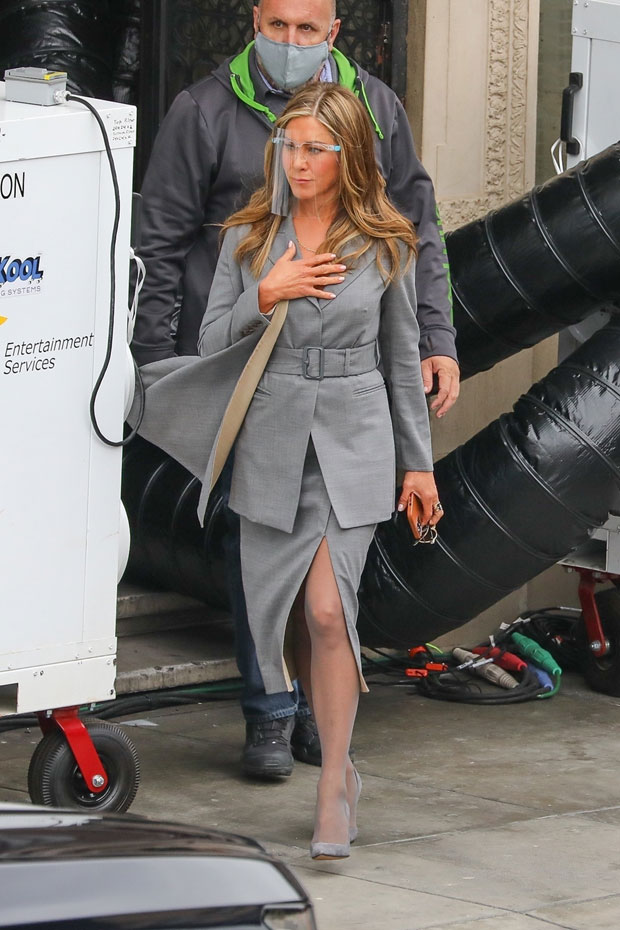 Jen wore a protective plastic face shield, which allowed her perfectly made up camera ready visage to be seen. The beauty looked extra bronzed, as the light grey suit really showed off her tanned skin. Her gorgeous blonde highlights that her BFF hairstylist Chris McMillan touched up on Jan. 26 looked absolutely perfect, at the actress wore her hair down and in sleek waves for a day of filming.

Not to be outdone was Jen’s co-star Reese Witherspoon, 44, who looked journalist ready in a dark blue pantsuit with small white pinstripes and a crisp white blouse. She had comfy footwear on, appearing to be wearing a pair of black Uggs boots, so maybe she was only being filmed from the knees up for the day, or wanted to change into her show’s on-camera footwear later on. 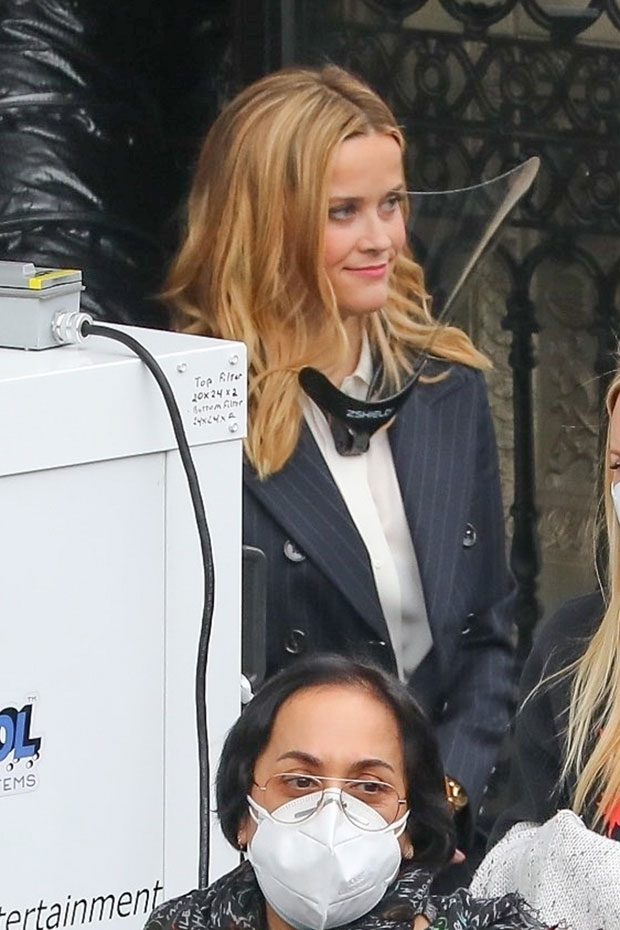 Reese Witherspoon looks all business in a smart pinstripe pantsuit on the set of ‘The Morning Show’ in L.A. on Feb. 9, 2021. Photo credit: BACKGRID.

Jennifer announced in a Jan. 26 Instagram post “Aaand, we’re back…” along with a clapboard emoji. She was seen with a fresh light blonde highlighting job and hair blowout courtesy of her longtime hair guru Chris, who could be seen over the smiling stunner’s shoulder. The Morning Show landed Jennifer her first individual Screen Actors Guild Award in 2020, where the usually comedic star took home Best Actress in a Drama. We can’t wait to find out where season two takes Jen and Reese’s characters.

Jen should be back on an even more anticipated set in the spring of 2021. The long-anticipated Friends reunion — which has been rescheduled several times since March 2020 due to COVID-19 — finally appears to be a go sometime in the next few months. Her former co-star and pal Lisa Kudrow, 57, revealed on actor Rob Lowe Jan. 13 Literally! podcast that that, “There’s different facets to it, and we already shot packages of things. I pre-shot something for it already so we’re definitely doing it because I already shot a little something.”

She also took the time to remind fans that this is NOT a reboot of the show itself. Rather, it’s simply a reunion of the six primary actors from the show: Lisa, Jennifer, Courteney Cox, 56, David Schwimmer, 54, Matthew Perry, 51, and Matt LeBlanc, 53. “It’s not, like, a scripted thing. We’re not portraying our characters. It’s us getting together, which just doesn’t happen a lot and has never happened in front of other people since 2004 when we stopped,” she explained, while promising, “I think it’ll be great.” The team behind the reunion special is hoping for an “early spring” 2021 taping with the stars of the show, which will go down on their original Friends studio on the Warner Bros. lot in Burbank, CA.