For a brief moment on Friends, Ross and Monica Gellar’s dad turned literally into a completely different person. Instead of legendary actor Elliott Gould, 82, some random guy was there in his place with David Schwimmer‘s Ross even delivering a line to him. The error was caught and the video shared by several TikTok users from a scene in the episode “The One in Massapequa,” which was episode 18 of season eight in 2002. The six lead characters (and Phoebe’s overly positive, ultra annoying boyfriend at the time played by Alec Baldwin) attend Ross and Monica Gellar’s parents Jack and Judy’s 35th wedding anniversary party on Long Island.

Ross and a very pregnant Rachel (Jennifer Aniston) are talking to his parents when Judy, played by actress Christina Pickles, drops the bomb that she told their entire circle of pals at the party that the two had secretly married, rather than deal with their son having a child out of wedlock with someone who wasn’t even his girlfriend at the time. She then walked away, with Ross asking, “Dad, what? We have to pretend to be married?” to a man who is clearly NOT Elliott. 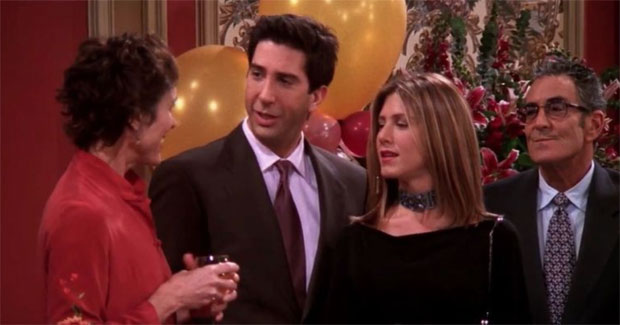 Ross and Rachel speak to a party guest where Ross’ dad Jack — played by Elliot Gould — would normally be standing behind the pair. Instead it was Elliott’s stand-in that was noticed by TikTok viewers. Photo credit: NBC.

While about the same age, the man is shorter and wears glasses. It turns out, that was Elliott’s stand-in on the show, and used in that scene since it was just Schwimmer delivering his line on-camera. Elliott later taped his sympathetic reaction, “Sorry son, I had to shave my ears for tonight,” which looked seamless when Friends originally aired on NBC. 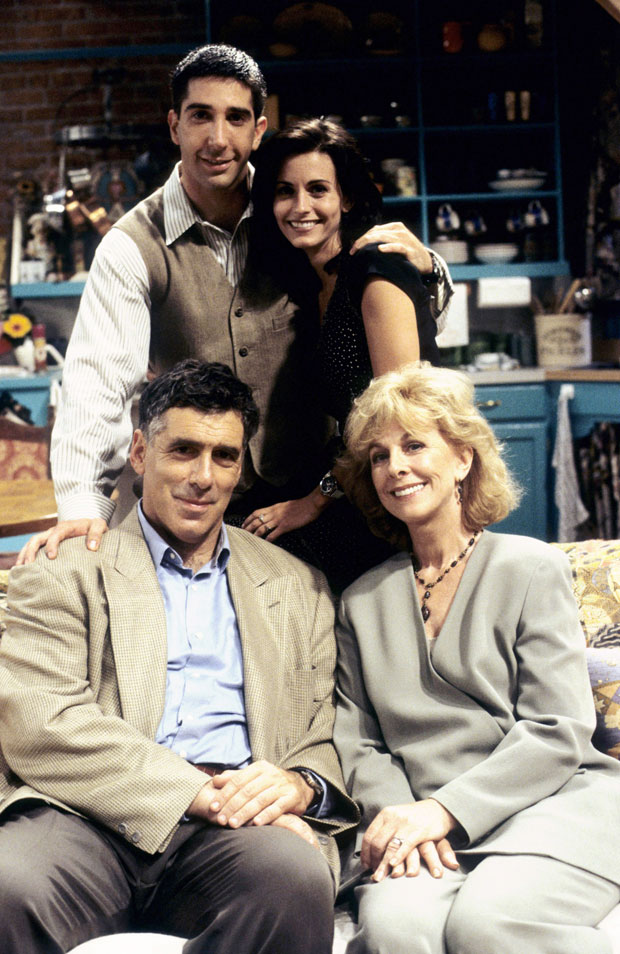 The Gellar family on ‘Friends’ that fans came to know and love. Siblings Ross and Monica stand behind parents Jack and Judy. Photo credit: Everett Collection.

“In all my Friends fan years how have I never noticed this guy before?” a TikTok user pointed out in a video showing the mystery Jack Gellar. It turns out that thanks to technology, a wider version that never showed stand-ins before is now the norm. According to Digital Spy, the explanation is that: “Back in the golden age of the ’90s, shows were filmed in 4:3, which was standard for the time. Now with wider screens, 16:9 has become the norm, meaning viewers are seeing the wider angle of the show – and all the bits that shouldn’t have been spotted.”

You can't fool a #Friends fanatic. Why is this not-Rachel standing in for Rachel in this ep? https://t.co/7U8K9VAhl4 pic.twitter.com/drO44q9qax

It isn’t the first time that the wider screen 16:9 format exposed more than what viewers were originally supposed to see. In 2015, fans spotted Jennifer’s stand-in appearing just behind Matt LeBlanc‘s Joey Tribbiani  in season nine episode 15’s “The One with the Mugging.” For a brief shot, a brunette woman who’s smiling face is definitely not Jen’s is seen standing where the actress would appear next. With a decade’s worth of episodes, there should be plenty of other fun accidental stand-in scenes out there that viewers haven’t come across yet.