Sam Asghari, 27, the longtime boyfriend of Britney Spears, 39, didn’t hold back on Tuesday (Feb. 9). With everyone buzzing about The New York Times’s explosive documentary, Framing Britney Spears, Sam took a moment to attack her father – and the man who has been overseeing her estate — Jamie Spears. “Now it’s important for people to understand that I have zero respect for someone trying to control our relationship and constantly throwing obstacles in our way,” he posted to his Instagram Story. “In my opinion, Jamie [Spears] is a total dick.” 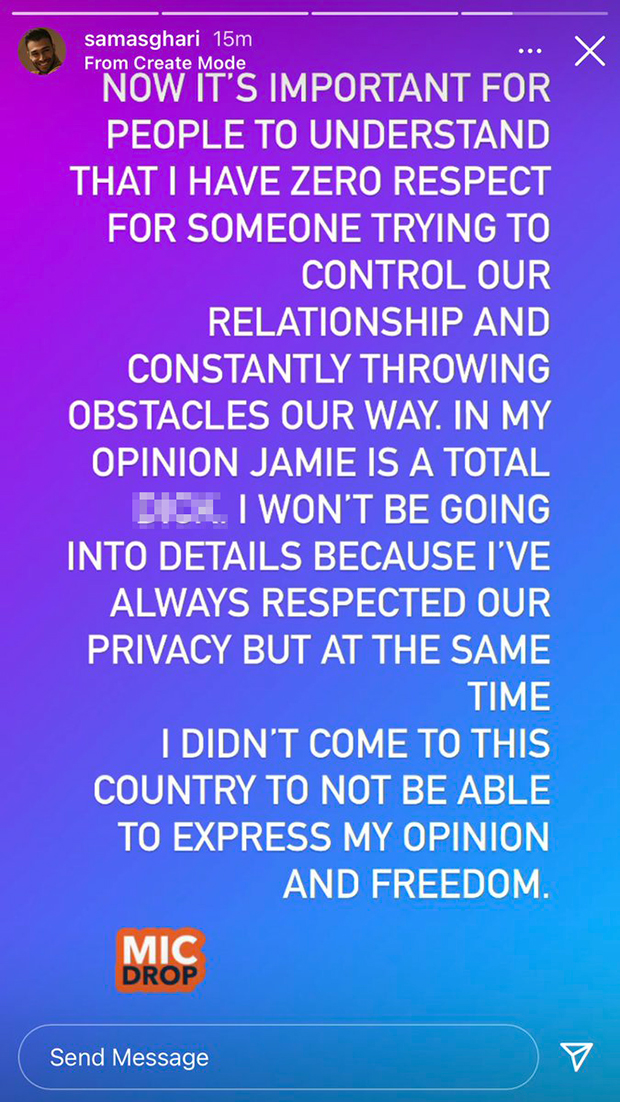 “I won’t be going into details because I’ve always respected our privacy,” added Sam, “but at the same time, I didn’t come to this country to not be able to express my opinion and freedom.” This post will certainly add fuel to the #FreeBritney movement, which has seen fans call for her to be released from her conservatorship and have total control of her life.

After the Feb. 7 airing of Framing Britney Spears, Sam spoke about Britney’s struggles. I have always wanted nothing but the best for my better half, and will continue to support her following her dreams and creating the future she wants and deserves,” he said to People. Britney has been under conservatorship since 2008, following her public breakdown a year prior.

Jamie, now 68, obtained temporary – and now, permanent – rights over her finances after her involuntary 72-hour psychiatric hold. The legal arrangement is usually designated for people with decreased mental capacities, particularly the elderly. The conservatorship, which has been extended four times, has denied Britney control of her estate and personal assets. Currently, Jamie serves as co-conservator of Britney’s $59 million fortune with Bessemer Trust. In 2020, Britney requested twice that her father be removed as a conservator of her $59 million fortune. Both times, her request was declined.

“If I wasn’t under the restraints that I’m under right now – you know, with all the lawyers and doctors and people analyzing me every day and all that kind of stuff – like, if that wasn’t there, I’d feel so liberated and feel like myself,” Britney once said during Britney: For The Record, a behind-the-scenes special filmed for MTV (which was part of the Framing Britney documentary.) “When I tell them the way I feel, it’s like they hear me but [they’re] really not listening. They’re hearing what they want to hear. They’re not really listening to what I’m telling them. It’s like, it’s bad. And I’m sad.”

Britney – who was married to childhood pal Jason Alexander for 55 hours in 2004 and backup dancer Kevin Federline from 2004 to 2007 – began her relationship with Asghari in 2016. Sam appeared as her love interest in her “Slumber Party’ music video, and the two made it official at the start of 2017. Since then, he’s been a source of support for Britney, including in 2019 when she stepped away from her Las Vegas residency to focus on her mental health after her father almost died from a ruptured colon in 2018.