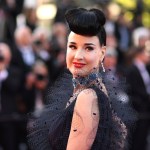 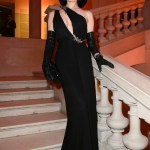 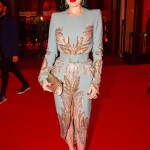 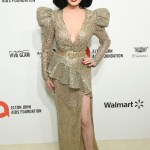 Dita Von Teese is speaking out about the serious abuse claims against ex-husband Marilyn Manson, stating that she never ‘experienced’ it during their relationship.

Dita Von Teese broke her silence about the emotional and physical abuse allegations against her ex-husband, Marilyn Manson. The burlesque dancer, 48, and shock rocker, 52, were famously together for several years in the early aughts. “I have been processing the news that broke Monday regarding Marilyn Manson,” Dita began. “To those who have expressed your concerns of my well-being, I appreciate your kindness. Please know that the details made public do not match my personal experience during our seven years together as a couple.”

“Had they, I would not have married him in December 2005,” Dita continued. “I left 12 months later due to infidelity and drug abuse. Abuse of any kind has no place in any relationship. I urge those of you who have incurred abuse to take steps to heal and the strength to fully realize yourself. This is my sole statement on this matter. Thank you for respecting my request.”

Dita’s statement comes two days after Evan Rachel Wood alleged that the person she previously accused of sexually assaulting her in her twenties was Marilyn (real name Brian Warner). “He started grooming me when I was a teenager and horrifically abused me for years,” the Westworld star wrote on Instagram. “I was brainwashed and manipulated into submission.” The actress met the singer when she was 18 and he was 36. They were briefly engaged in 2010. Some of Marilyn’s other former partners have now come forward with similar stories of alleged abuse.

Marilyn released a statement on Instagram denying the claims on February 1. “Obviously, my art and my life have long been magnets for controversy, but these recent claims about me are horrible distortions of reality,” he wrote. “My intimate relationship have always been entirely consensual with like-minded partners. Regardless of how — and why — others are now choosing to misrepresent the past, that is the truth.” The Mechanical Animals singer has since been dropped from his record label, Loma Vista Recording and from talent agency CAA. He will also no longer appear on the Shudder series Creepshow or Starz’s American Gods.

If you or someone you know has been sexually assaulted, please contact the National Sexual Assault Hotline at 1-800-656-HOPE (4673) or go to rainn.org.