Marilyn Manson famously sings “Rock is deader than dead,” but the 48-year-old rocker is lucky to be alive following a freak accident at his Sept. 30 show at the Hammerstein Ballroom. While performing his version of Eurythmics’ “Sweet Dreams (Are Made Of This),” a stage prop of a pair of handguns fell on top of him. Yikes! The show was cut short as medics loaded the “Beautiful People” singer into a stretcher. Thankfully, Marilyn is going to be okay.

“Manson suffered an injury towards the end of an incredible NYC show,” a rep for the told Variety. “He is being treated at a local hospital.” Fans shouldn’t be too worried, as a source close the situation said that Marilyn “should be fine,” though Variety noted that it wasn’t an official statement. Here’s hoping this whole incident appears more serious than it really is, and that Marilyn is back up on his feet sooner than later.

Update: Well, it seems Marilyn needs two weeks to recuperate. He’s canceled nine tour dates on Oct. 1. The Boston, Huntington, Toronto, Camden, Columbus, Chicago, Milwaukee, Kansas City, and Houston dates have all been axed, with Manson planning to make up the dates at later time, according to Deadline. Marilyn will resume the Heaven Upside Down tour on Oct. 15 in Grand Prairie, Texas.

The actual timing of the accident is in question, as though his rep said the incident happened sometime around the 45-minute mark, Brooklyn Vegan says it was “about five songs in.” At the center of the stage, there was a podium framed by these two giant, fake pistols. Manson began to climb, but as he did, the podium wobbled and fell forward – pinning Manson against the stage. Crew rushed immediately and pulled the props off of Marilyn, and the show came to a screeching halt. Some fans were not thrilled to have the show end prematurely (with reportedly no refunds given) while most were scared for Marilyn’s life. 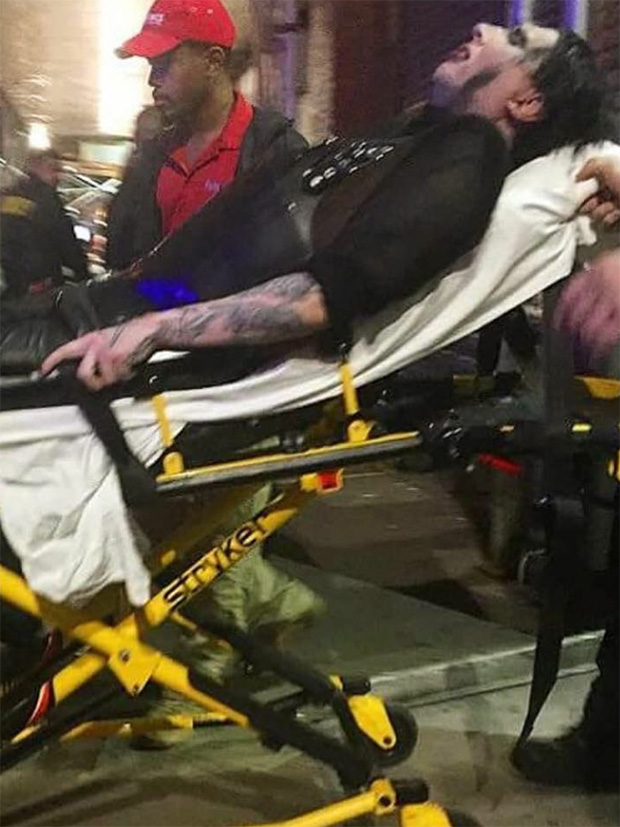 It seems that Manson’s Heaven Upside Down tour is particularly cursed. A day before the NYC stage calamity, Manson broke his ankle while performing his signature hit, “The Beautiful People,” while at Stage AE in Pittsburgh, Pennsylvania. It’s scheduled to continue through the end of October – all the way until the end of October. Manson’s next stop is the House of Blues in Boston, Massachusetts for the Oct. 2 date. Fingers crossed that he doesn’t suffer any more accidents.

Are you glad that Manson is going to be “okay,” HollywoodLifers?