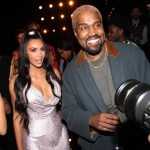 Kim Kardashian did not wear her wedding ring in a new selfie and her Christmas Eve photos, amid reports of a potential divorce between Kim and Kanye West.

Kim Kardashian has not been wearing her wedding ring in recent Instagram posts, amid multiple reports of a potential divorce with her husband of nearly seven years, Kanye West. Her fingers were bare in a selfie of the 40-year-old Keeping Up with the Kardashians star modeling a brown lingerie set from SKIMS’ new Body Basics line, shared on Jan. 5. It wasn’t the first time Kim ditched her wedding ring in front of the camera.

The SKIMS founder’s wedding ring was also MIA in her Christmas Eve photos as she posed with family members and her children North, 7, Saint, 5, Chicago, 2, and Psalm, 1, whom she shares with Kanye. The Grammy-winning rapper was not present in these pictures, which you can scroll through below.

Kim was last seen wearing her wedding band in a video of herself modeling SKIMS backless shapewear on Dec. 14, which you can watch below. On the very same day Kim shared her SKIMS selfie — sans ring — a report alleged that Kim and Kanye’s marriage is practically “over.”

“Divorce is imminent” for Kim and Kanye, multiple sources told Page Six on Jan. 5. “They are keeping it low-key but they are done. Kim has hired Laura Wasser and they are in settlement talks,” the insiders further claimed. HollywoodLife has reached out to Kim and Kanye’s reps for comment, but didn’t hear back by the time of publication. We can not independently verify these claims at the time, and Kanye and Kim have not announced any plans to split at the moment.

However, Kanye and Kim’s marriage didn’t sound as doomed in a separate report that also arrived on Jan. 5. The parents “haven’t given up” although “the subject of divorce was looming for much of 2020,” according to a report from TMZ. The couple have even been in marriage counseling, the outlet claimed.

However, Kim has allegedly had “Laura Wasser on retainer for years for various reasons,” TMZ claimed, mentioning the same page as Page Six’s report. Kim was even allegedly “ready to pull the plug on the marriage at one point,” but thought doing so would be “cruel” after Kanye “was going through a serious bipolar episode,” insiders further told TMZ.

In July of 2020, Kim had defended Kanye and wrote about him “living with bi-polar disorder” after the Yeezy founder posted controversial tweets earlier that month. Kanye wrote that he wanted to “get divorced” and accused both Kim and Kris Jenner of trying to “fly in with 2 doctors to 51/50” him while he was staying in Wyoming (“51/50” lets someone be held in a psychiatric hospital, against their will). Before the tweet storm, Kanye also claimed that Kim considered aborting their firstborn, North, while crying at his first presidential campaign rally.

“They have been living separately for a few months,” TMZ‘s report added, explaining why Kanye was in Wyoming in July of 2020 while Kim was at their family home in Calabasas. Kanye and Kim eventually took a family vacation “to see if they could repair things” by August of that year, per TMZ.

For the getaway, Kim and Kanye took their four children to the Dominican Republican and then a glamping trip in Colorado. At the time, “most of their conversations [were] about the kids” and “nothing ha[d] changed between them,” a source close to Kim and Kanye EXCLUSIVELY told HollywoodLife after the vacation. However, Kim and Kanye appeared to be working through their marital issues by enjoying romantic dates together later in the fall of 2020.

Kanye West shared a photo of his date night with Kim Kardashian in Sept. 2020. (Courtesy of Twitter/@kanyewest)

By the end of 2020, “everything got put on hold for the Christmas holidays,” according to TMZ‘s new report. Now that the holidays are over and it’s the beginning of a new year, though, the “issue is front and center” again, the report concluded.

The new reports about Kim and Kanye’s marriage echo what we have previously learned from sources. “Kim and Kanye are struggling to stay together as a couple and have for quite some time now,” a source EXCLUSIVELY told HollywoodLife in Dec. 2020, but added, “It doesn’t seem like she’ll ever actually file for divorce, at least anytime soon. They really are living separate lives right now and have for awhile.”