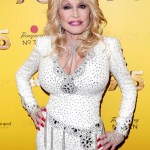 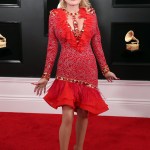 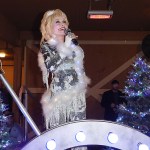 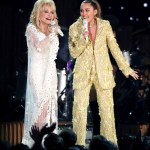 Dolly Parton poked fun at RuPaul when she talked about ‘always’ staying ‘ready’ with makeup on, during a fun conversation the two had for a new interview, and Twitter users responded with hilarious thoughts.

Dolly Parton, 74, didn’t hesitate to cheekily compare her own “staying ready” makeup and dress up routine with Rupaul’s when the two icons sat down for a discussion that was part of the new Dec. issue of Marie Claire, and Twitter users couldn’t help but respond with bold tweets. During the interaction, the singer and drag queen were talking about maintaining their appearance, and after 60-year-old RuPaul admitted to eventually taking off his makeup, heels, etc. after a day of entertaining, Dolly sassily said she does quite the opposite.

“That’s the thing: There are similarities in what we do, but I take all that stuff off,” RuPaul said.

“Well, I don’t. I have to always stay ready—street ready, I always say. I have to keep my makeup on and keep my hair done. Like, when I’m in L.A.—I’ve told you about it—if it’s going to earthquake, if we get an earthquake, I’m not running out in the street looking like you look now,” Dolly responded.

Once that part of the discussion was passed around on Twitter, Dolly fans quickly posted their thoughts about how the blonde beauty totally shaded the RuPaul’s Drag Race host. “RIP RuPaul Charles. Absolutely, totally, utterly slaughtered, & ripped to shreds by one Ms. Dolly Rebecca Parton,” one tweet read.

“Dolly Parton throwing low key shade at RuPaul is everything,” another tweet read while a third jokingly asked, “Why did Dolly Parton murder RuPaul in cold blood?” Another wrote, “Dolly Parton just ate RuPaul alive” and a fifth posted, “I love RuPaul and Dolly and thought this was hilarious. I’m guessing Ru did as well.”

Why did Dolly Parton murder RuPaul in cold blood? pic.twitter.com/HTAn7izKo2

Right before they mentioned being makeup ready, Dolly and RuPaul discussed other things that brought on funny interactions such as when they wear high heels. After Dolly talked about how she made breakfast for her and her husband, Carl Thomas Dean, that morning, RuPaul asked her if she wore her heels while she was cooking.

“I always wear my high heels. Don’t you?” she responded. “No. That’s the thing: There are similarities in what we do, but I take all that stuff off,” he admitted, which is what prompted Dolly’s sassy thoughts about her makeup.

Dolly’s need to always be looking her best is not too surprising considering the legendary musician is known for her impressive style and overall gorgeous appearance. She wowed fans when she stepped out in a figure-flattering white sequined dress during her time on stage at her 2020 Holly Dolly CBS Christmas Special on Dec. 2. During the special, she performed some of her memorable hits such as “Coat of Many Colors” and “I Still Believe”.